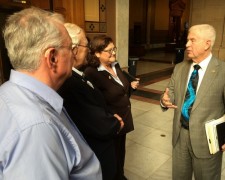 One week ago Indiana Senate Bill 308 passed that chamber by a 50-0 vote to move on to the House in the next phase of the Indiana General Assembly. Farmland taxes are among the items addressed in the bill, and Katrina Hall at Indiana Farm Bureau said they are pleased with the way in which the bill moved through the senate at a time of tightening farm profit pictures.

“It works to more immediately match a farmer’s net income with the taxable value that they would have for farmland, so we think that’s very positive,” she told HAT. “Right now there is a delay in that, so that’s been part of the problem in the mismatch of the value going up from data that was several years ago to income declines that our farmers are experiencing in the last couple of years. So we’re happy with that and it also has the statutory capitalization rate and it solves the soil productivity issue for good by just freezing them at what they were in 2011 before all the controversy with those moved ahead.”

Hall added the level of farmland taxes now is just too high for the current income structure for crop farmers, and SB 308 addresses that. She’s optimistic as the bill is considered in the House.

“It will be carried by Ways and Means Committee chairman Tim Brown. I had a chance to talk to him and it will be a couple of weeks probably before that will be heard in the house, but we feel good about our chances in the house. But we do, like all the farmers across the state have a story to tell the members of the House of Representatives and also make sure that they understand how burdensome property taxes have become for Indiana farmers.”

Hoosier farmers are encouraged to tell that story to their state representative. There are 3 bills this year that address Indiana road funding, most notably HB 1001 which directs 5 of the 7 cents in gas pump tax directly to roads. It passed the House last Tuesday and Hall explains more:Katrina Hall road funding update