Farm Bureau policy is formed on the local level, and then delegates gather to approve a statewide policy book on hundreds of major and minor issues. During a 6 hour session last weekend, delegates moved painstakingly through the book, but made very few changes to the positions already held by the state’s largest farm organization.

One change that was made is a more aggressive stand on implementing broadband coverage in rural areas. IFB president Randy Kron said farmers are tired of the slow pace of progress in bringing high speed internet to rural areas, “There is a lot of technology in agriculture today that requires high speed internet, and there are a lot of people that do not have it. If we are going to compete, we have to have it.” It has been estimated that 14% of Indiana does not have access to broadband service.  Bob Kraft, of Hamilton County, proposed a resolution that called for immediate action to increase  broadband service statewide. This measure was adopted by the delegates. 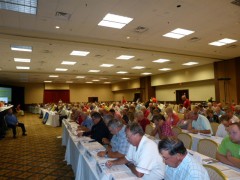 Tiffany Obrecht, a delegate from Marion County that brought the resolution forward, says there are parts of Indianapolis where people do not have access to grocery stores, “When we talk with people about where their food comes from, the conversation is mute, because these people do not get their food from a grocery store.” She explained that many people in these areas get their food from gas stations or convenience stores, where prices are higher and there are no fresh fruits, vegetables, or meats.

This is expected to be an issue in the next Farm Bill, and Kron said agriculture will need to support this issue in order to get the support of urban lawmakers for farm programs. The IFB policy calls for support of programs that eliminate food deserts. “Food deserts are a very serious issue for low-income families whose dollars do not go as far when they are forced to purchase food at a gas station or convenience store because there is no grocery nearby. Those food options are not only more expensive, but they are also generally less nutritious,” said Kron.

Speaking of the Farm Bill, there were some general policies contained in the book, but not a lot of specifics, Kron said more study is needed before a definite policy can be adopted for the next Farm Bill, “I want to make sure we carefully consider and study our options. We will likely get some input from Purdue on some of the economics.”  More input on the Farm Bill will be gathered from the grassroots members this fall and considered at INFB’s convention in December.

Recommendations on national policy will be sent to American Farm Bureau Federation for consideration during the AFBF annual meeting, which will be held in January. Hoosier farmers need Farm Bureau to support policy that works to provide a safety-net when needed and advocate for a regulatory environment that will create opportunities for the next generation, said Kron. “As we face more challenging economic times, the members of Indiana Farm Bureau will need to strengthen the organization’s advocacy efforts at the local, state and, national levels,” he stated.

Other issues given strong support in the policy book that will likely come up before the Indiana General Assembly in 2017 include  funding for rural roads and  property taxes. “While farmers are grateful for the important property tax relief that the General Assembly passed in 2016, we will always be working on property tax assessment concerns,” said Kron. Delegates unanimously supported a continued push for increased road funding. Farmers rely on quality roads for transporting commodities and equipment. INFB policy encourages the General Assembly to increase funding for state and local roads and bridges in addition to increasing fuel taxes. Delegates also added language that supports shifting current sales tax on fuel for road construction and maintenance.