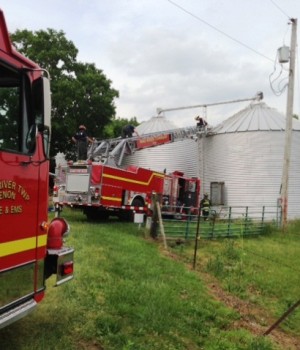 The number of confirmed grain bin entrapments and incidents in other confined spaces on U.S. farms fell in 2015 to its lowest level in a decade, but it is likely that many such cases continue to go unreported, a Purdue Extension farm safety expert says. Bill Field, professor of agricultural safety and health, said there is no mandatory national reporting system for confined space incidents. “Based on prior research through media sources and public safety records, it is estimated that the documented annual cases of agricultural confined space injuries or fatalities represent only about 70 percent of the total incidents that have occurred in the Corn Belt,” Field said. “There has been reluctance on the part of some victims and employers to report nonfatal incidents since doing so could result in work delays or higher insurance costs.”

Nationwide, 47 confined space incidents were reported last year, a 34 percent decrease from 2014, when 71 cases were confirmed, according to Purdue’s annual Summary of U.S. Agricultural Confined Space-Related Injuries and Fatalities. It was the fewest number of reported confined space cases since 46 were recorded in 2006. The number of fatalities fell from 31 in 2014 to 25 last year, the study said.

Grain entrapments were once again the most common type of confined space incident. Entrapments typically happen when a farm worker enters a bin or silo to dislodge clumps of grain during loading or unloading and becomes engulfed when the grain breaks loose, Field said. Last year, 24 entrapments were reported nationwide, including 14 fatalities. There were 38 documented entrapments and 17 deaths in 2014.

Entrapments were reported in 13 states last year, mostly in the Midwest. Iowa led the nation with seven incidents. Nebraska had four, North Carolina and Ohio had two each, and single cases were reported in Minnesota, Wisconsin, North Dakota, South Dakota, Arkansas, Illinois, Indiana, Kentucky and Connecticut.

Other types of confined space incidents covered in the report were:

* Six entanglements in machinery resulting in one death.

* Four cases of asphyxiation or poisoning resulting in three deaths.

* Four cases of being submersed in water or other liquid resulting in three deaths.

* Three cases of being pinned or struck by a heavy object resulting in one death.

“We need to know where the needs are so we can focus our prevention and rescue training efforts in those areas.”