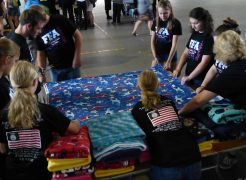 Transform Purpose to Action is the theme of the 88th Indiana State FFA Convention now underway in West Lafayette. Almost 300 members from around the state put the theme into action Tuesday during the service project at the Armory, making tie blankets for Riley Hospital, Peyton Manning Children’s Hospital, and two West Lafayette centers. Sneha Jogi, Indiana FFA Northern Region VP is happy the kids will have the blankets for years to come. 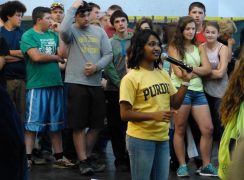 “The coolest thing about these blankets is that each FFA member is writing a letter to the recipient, and inside of the letter is going to be an FFA emblem patch,” she explained. “So they’ll always remember where this FFA impact came from and it’s a really neat thing for members to do. There are 270 of them all working to do the same thing. We found these four organizations and they really wanted to work with us and have these blankets donated.”

“If they’re not competing in a contest or attending a workshop, this is a place where they can come and do something fun that they know is going to make an impact in the future.”

During the 88th convention, even though the planning and execution is by the state officer team, the focus is on members attending from around the state.

“We have a lot of new things planned for members and we’re actually doing a lot of member spotlights and highlighting a lot of them simply because yes, state officers impact FFA members, but they don’t understand how much they impact us as a state officer team and as an association. So, we’re doing a lot of member highlighting this year at state convention which is just a really experience for them to not only see what FFA is about, but also meet people from across the state.”

The week’s activities wrap up Thursday afternoon with election and installation of a brand new state officer team in Elliott Hall of Music.