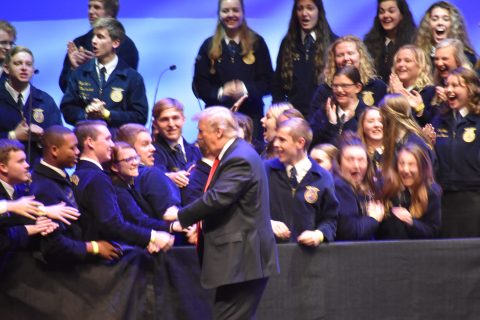 President Trump was greeted with much enthusiasm from FFA members from across the country at Bankers Life Fieldhouse in Indianapolis Saturday. Hoosier Ag Today was there as he told the young people in the room that there was no group better prepared for real life than FFA members.

He discussed the farm bill and asked for time.

“We’re fighting very hard for a terrific farm bill that includes work requirements for food stamps… And don’t worry about the farm bill. The farm bill we can sign, I could have signed it three months ago, but we’re trying to make a good bill. Is it okay if I take a little longer?”

The president also addressed the trade war with China, though he didn’t want to use the word “war”.

“They’ve been doing very well against us for 25-30 years. They’ve been doing beyond well. Taking out $500 billion a year out of the United States. Would you say that’s a lot? That’s a lot of corn. That’s a lot a wheat. That’s a lot of soybeans. I said, ‘you can’t do that.’ So, we’re in a trade dispute, I want to use that word because it’s a nice soft word, but we’re going to win. You know why? Because we always win…How we got put in this position in the first place is ridiculous.”