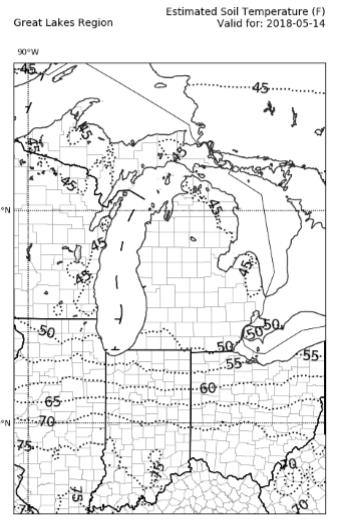 Higher temperatures and dry weather allowed for rapid planting progress last week, according to Greg Matli, Indiana State Statistician for the USDA’s National Agricultural Statistics Service. Conditions were ideal for planting as warm weather and clear skies increased soil temperatures and dried fields, with only a few reports of scattered showers impeding progress. The average temperature for the week was 66 degrees, 5.8 degrees above normal for the state. The amounts of rainfall recorded at weather stations varied from 0.00 inches to 1.81 inches over the week. The statewide average for precipitation was 0.36 inches, or 39 percent of normal. There were 5.6 days available for fieldwork for the week ending May 13.

Major progress was made last week for what started off as a rather slow planting season, as percent planted shot ahead of the fiveyear average and previous year levels for both corn and soybeans. While the dry conditions were ideal for planting, the lack of rain hindered crop emergence over the last week. Winter wheat growth progressed and caught up to the 5 year average for wheat jointing. Similarly, pasture and hay growth progressed slightly with the warmer temperatures but were still slowed by the unusually dry weather. High winds reportedly resulted in unfavorable conditions for spraying. Livestock are reported to be in good condition with calving winding down. Other activities for the week included cutting cereal grains for silage, tile installation, tillage, spreading fertilizer, and moving grain to elevators. 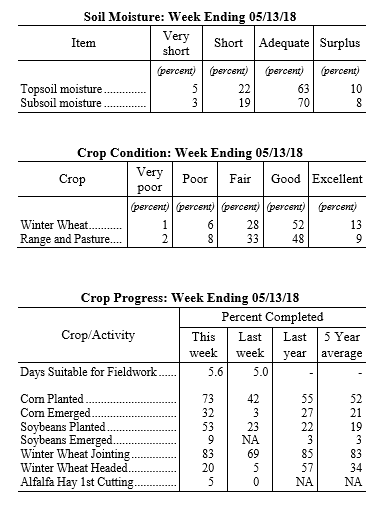