Corn and soy disease in 17 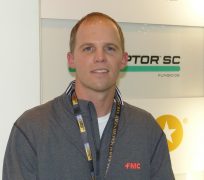 Anthracnose in corn and stripe rust in wheat were present in the Hoosier state in 2016. Will we see a repeat this year? If we get a wet spring again those diseases could be back. Nick Hustedde with FMC Technical Services says wet and humid environments are extremely conducive for those diseases to thrive.

“On the early season side if we’re thinking about just after planting in corn in particular, we need to be mindful of anthracnose. That’s going to be an early infector. Also talking about wheat there’s some stripe rust they’ve found over wintering in the Oklahoma area. Typically that’s a disease that comes up in the rust pathway and we did have some issues with stripe rust in wheat last year, so that’s another one that we really need to be mindful, especially earlier in the growing season.”

Hustedde told HAT FMC has a new product this year to protect against those diseases and deliver overall plant health benefits for over 20 crops, including corn, soybeans and wheat. It’s called Topguard® EQ fungicide.

“Some growers may be familiar with Preemptor™ SC fungicide and it basically all goes to the background of flutriafol, which is our triazole chemistry. It’s extremely systemic and we’ve seen really good results out of it. Now Preemptor has a strobilurin component that has partnered with that triazole and so does Topguard EQ, but it’s a different strobilurin component. So with EQ that’s one that we’re probably going to be seeing a little bit more of in the marketplace.”

He said the application timing varies by crop and the disease you’re most concerned with.

“When we’re thinking about applications in corn, again if you’re targeting those early diseases such as anthracnose, if we can throw it in with a herbicide and get some activity. If we’re targeting some of those later infectors such as gray leaf spot, southern rust, northern corn leaf blight, a lot of times a tassel time treatment is going to be a little bit more consistent.”

Hustedde said R3 is the sweet spot for soybean applications, although some treatments can go on at R1 for treatment of white mold or if you’re seeing disease out in the canopy early in the season. Pulling the trigger then can keep the leaf healthy and “maximize the photosynthetic factory.”