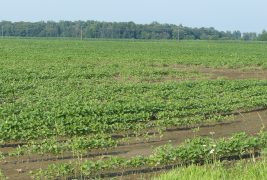 Hoosier Ag Today reported this week that southwest Indiana corn and soybean harvest could be wrapped up by the end of this week. In north-central Indiana one farm operation is dealing with more in their fields than just the crops, but they hope to wrap up soybean harvest this week. Corn will need more time. Neil Mylet near the Cass and Carroll County line says favorable weather ahead is helping.

“Beans seem to be drying down and we switched back to beans Tuesday and should be able to finish by the end of this week,” Mylet said. “We only have about 500 acres of beans to go. I think we can get corn off hopefully by the end of next week with no breakdowns or major weather changes, which is going to be nice. It’s been a well-paced fall.” 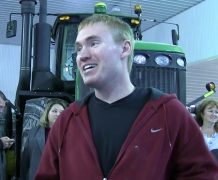 “Which was absolutely overwhelming, because not only did we have that one isolated weather event, prior to and after that event we had continuous rain for almost a 2 week time period, on and off. We’re finding that the earlier planted beans, as is normally the case, fared much better than we ever imaged they could. They’re not record yields but strong yields given the weather.”

Later planted beans aren’t faring as well and those fields are full of holes.

Those weather events just keep on giving. Mylet says between the floods and tornadoes moving through a couple of weeks later, his combine stumbled upon kitchen and camping gear in the fields, in addition to a bowling ball and massive chunks of firewood. Unfortunately, his corn head found the firewood before they did, making for down time in corn harvest operations.