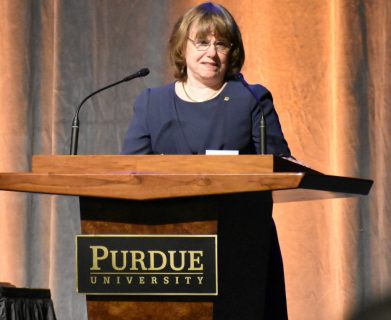 The keynote address during the Purdue Ag Alumni fish fry was delivered by one of the world’s leading experts on global food security, Catherine Bertini. She is also former executive director of the United Nations World Food Programme and a 2003 World Food Prize laureate. How to feed a vastly growing world population is a pressing issue that motivates much of the agriculture industry, but Bertini told HAT before her address there is a current issue of 800 million people in the world in desperate need of food today, and every day.

“The good news actually is that that is a fairly constant number despite the fact that over decades population has dramatically increased,” she said. “But the bad news is there are still over 800 million who desperately need more food.”

She said farmers, especially poor farmers in the developing world need to be more productive, and for that they need help.

“There are more poor, hungry people in rural areas than there are in urban areas, although people are poor in urban areas as well. So, if there was an effort, and there are many efforts to increase the viability of farms, especially small holder farms in the developing world, it will help the rural areas and hunger on site, at home.”

The mission is to decrease the number who are desperate for food even with an increase in population. A significant increase in local food growing capacity could make a dent. So, educating those farmers is important, but so is creating new opportunities, specifically for women.

“Any farmer who is literate is more productive than a farmer who is illiterate, and women are more often illiterate than men because the girls don’t have so many opportunities to go to school,” she explained. “We also learned from IFPRI, the International Food Policy Research Institute, that women are more likely to follow the practices of other women farmers. So it makes sense to be sure that women farmers are educated and that will help have a big impact on production.”

Bertini is currently a Distinguished Fellow for Global Food and Agriculture at the Chicago Council on Global Affairs. She acknowledged Purdue’s involvement in post-harvest loss, saying some of the creative work being done at Purdue can be replicated in many places around the world, helping take advantage of very large amounts of food that would otherwise go to waste.