Food Companies Moving Ahead with Their Own GMO Labels

The Senate will vote on the GMO labeling bill this week; and, if passed, it will move to the House. Meanwhile, a Vermont labeling law went into effect last Friday requiring labels on products containing GMO products.  Some food companies, however, are moving ahead with their own labels. Kelly Johnson, VP of Government affairs for the Campbell Soup Company, says Vermont has written a bad labeling bill and Congress has failed to establish a national standard. So Campbell’s has decided to come up with its own label, “We feel we can write a better label than Vermont, one that does not scare consumers and promotes the safety of GMOs.”

The Campbell’s label states in clear and simple terms what products in the soup are produced with GMO technology, but also states on the label that the FDA has tested and approve the safety of GMO technology, “When you do it like that consumers say, ‘Oh, I get it, I know what is GMO, I get to make my own decision, it is clear, it has been tested, I am OK with it.’” 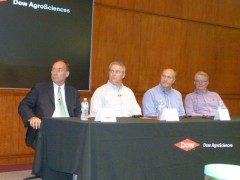 Campbell believes that this approach will not demonize GMO technology but will reassure consumers. Johnson feels that this approach will help consumers trust GMOs and will not result in an advantage for non-GMO products, “If you held educate consumers with clear, simple, and assuring language, they will accept the product.”  He feels some of the aggressive, voluntary non-GMO labels that are being used today actually do more harm than good by scaring and confusing consumers. The bill now before the Senate would eliminate these voluntary labels and set a national standard.Kelly Johnson was part of a panel discussion sponsored and arranged by Dow AgroSciences at their headquarters in Zionsville, IN.

But will Congress support this approach? There appears to be enough votes in the Senate for passage, but the Senate bill is different from the one passed a year ago by the House.  If yet another compromise can be reached on Capitol Hill and if this bill eventually gets the approval of the USDA and FDA, remains to be seen.