Former ASA and NCGA President Kemper: “This is a Trade War”

Are we in a trade war with China? President Trump says we’re not, but Alan Kemper, a corn and soybean grower in Tippecanoe County and former President of the American Soybean Association and the National Corn Growers Association, believes we are in a major trade war with China, and we are currently fighting the opening battles. He doesn’t believe China will back down easily.

“They will go to the mat for their country as long as their people are fed. Food security is huge in China, just like it should be in every country, and they can keep their people fed by not using U.S. products. That’s what really concerns (farmers).”

Kemper also believes that the economics of increased Chinese tariffs could be far worse than what many economists are saying. 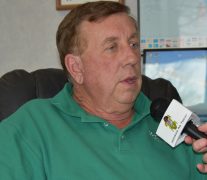 He says there are many ramifications that Washington lawmakers and USDA need to consider.

“You can lose up to 100,000 farmers in the next 12 months. Are you ready for that in American agriculture? Can you afford to lose 100,000? If not, how are you going to help protect them? It’s not necessarily infrastructure. It’s not the bells and whistles that are 5 years out. It’s something that’s going to have to happen almost overnight. You have a lot of farmers on financial cliffs that are going to drop off. So, is there any way you can do anything in the lending processes, in the crop insurance processes, that guarantees a more stable safety net?”

One of Kemper’s biggest concerns is what this trade war could do to young farmers who will have to deal with the long-term impacts of potential soured trade relationships.