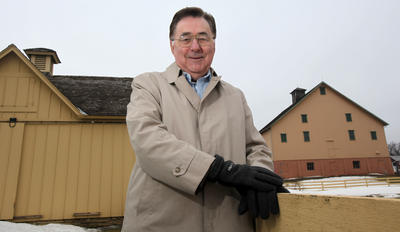 Kleckner was a champion of farmers and the goal of increasing net farm income, advocating increased agricultural trade and the acquisition of new world markets. Kleckner was the only farmer on the U.S. advisory team to the GATT (General Agreement of Trade and Tariffs) negotiations when they began in September, 1986, in Uruguay. Mr. Kleckner served on the U.S. Trade Advisory Committee, with appointments from three U.S. Presidents (Ronald Reagan, George H.W. Bush, and Bill Clinton). In that role, he has attended World Trade Organization meetings in Canada, Singapore, Brussels, Geneva, Cancun and Hong Kong, working to gain access to new markets for American farmers.

From 2000 to 2012, Kleckner was the Chairman of Truth About Trade & Technology (TATT), a nonprofit advocacy group led by American farmers. Over the years Kleckner also served on many company and organization boards including the World Food Prize, the International Food & Agricultural Trade Policy Council, the National Policy Association, the National Livestock Producers Association, the Meat Export Federation, the College of Agriculture at Iowa State University, Iowans for Tax Relief, and the Health Policy Corporation of Iowa.  Kleckner was a frequent editorial contributor in the press and broadcast media.

In his nearly 60 years of service to agriculture, Kleckner travelled millions of miles, visited 82 countries, and discussed agricultural policy with hundreds of thousands of people – from European royalty, U.S. Presidents, and international Agriculture Ministers to countless farmers around the world.  In recognition of his contributions to agriculture, he is the namesake of TATT’s Kleckner Trade & Technology Advancement Award and Iowa State University’s Dean Kleckner Global Agriculture Graduate Scholarship Award.  He was recognized with the AFBF’s Distinguished Service Award, U.S. Meat Export Federation’s Michael J. Mansfield Award, American Society of Farm Managers and Rural Appraiser’s Carl F. Hertz Distinguished Service in Agriculture, and named to the Centennial Honor Roll by agricultural fraternity Alpha Zeta.  He also was the recipient of honorary degrees, including from Wartburg College in Waverly, IA, and Iowa Wesleyan College in Mount Pleasant, IA.

Kleckner was a well-known and liked figure whether in Washington or on the farm.  He was renowned for his great memory for the people he had met, his listening skills, humorous and plain-spoken yet persuasive speech, conservative politics, and ability to strike up a conversation with anyone, anywhere, at any time, about anything.

Outside of farming and his time with the Farm Bureau, Kleckner enjoyed spending time with family, especially waterskiing on the Cedar River in north Iowa and taking family camping vacations across the U.S. and Canada.  He also enjoyed fishing, snowmobiling, reading thrillers, as well as watching sports, whether at the professional level, particularly his beloved St. Louis Cardinals, or the local sports competitions of his children and grandchildren.

Kleckner was born in Riceville, Iowa, on October 7, 1932, to Ralph and Grace (Lenth) Kleckner, themselves children of Iowa farmers. Raised on a farm near Rudd, Iowa, Kleckner attended Rudd Public Schools, playing on the high school’s basketball team and state championship contender baseball team.  He graduated from high school in 1950 as salutatorian of his 16-member class, his future wife graduating as the valedictorian. Learning to farm from his father, grandfathers and his own copious reading, at age 18 he took over operations of the family farm with his brother Rex following the early death of their father. This responsibility precluded him from attending college.

He married fellow Rudd High School student Natalie Kitzmann on June 7, 1953, at St. John’s Lutheran Church, Osage, IA, and together they raised five children on the family farm: Rev. Mark (Kimberly) Kleckner of Bedford, MA; Scott (Jeananne) Kleckner of Van Meter, IA; Kirk (Karen) Kleckner of Blaine, MN; Rhonda Kleckner Kelloway of Glen Ellyn, IL; and Lisa (Travis) Kleckner Winkey of Long Lake, MN.  While operating the family’s corn, soybean and hog farm, he served the community with several terms on the Rudd-Rockford-Marble Rock school board and the St. John’s Lutheran Church board of elders. His military service was completed through the U.S. Army in Germany in 1955-56.

Kleckner was preceded in death by his parents, Ralph and Grace (Lenth) Kleckner, daughter-in-law Judy Black Kleckner, and niece Julie Kleckner Baird. He is survived by his wife Natalie, his five children and spouses, eleven grandchildren and spouses, and by his younger brother Rex (Irene) Kleckner of LeRoy, MN, two nephews, a nephew-in-law, and their families, as well as a number of cousins.

A public memorial service for Dean Kleckner will be held at Gloria Dei Lutheran Church, 8301 Aurora Avenue, Urbandale, IA, on Tuesday, August 18, 2015, at 3:00 p.m. immediately followed by a reception and fellowship at the church. The committal, at McLarens Resthaven Chapel in West Des Moines, will be private. For more information call Gloria Dei Lutheran Church at 515-276-1700.

The family suggests that in lieu of flowers, memorial donations may be made to the American Farm Bureau Foundation for Agriculture, 600 Maryland Avenue SW, Suite 1000W, Washington, DC 20024 or The Alzheimer’s Association, P.O. Box 96011, Washington, DC 20090-6011.