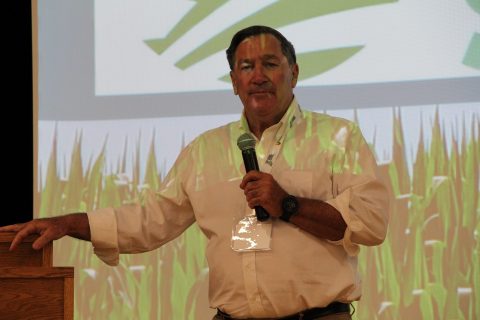 Former U.S. Senator Joe Donnelly spoke at the event, promoting the benefits of adding solar panels to your farm. He calls it a win-win. In addition to it being good for the environment, it provides farmers great payments.

“They average about $800/acre/year where solar installations are in place on farms. So, for our farmers, it’s a diversification that reduces risk…Having solar is just one more way to diversify risk, to create more stability, to create a stronger balance sheet, which enables you to pass it on to your next generation.”

Opponents of adding solar to farms argue that you’re taking good, productive farmland out of production. To that, Donnelly responds, “There’s not a lot of people who are smarter than our farmers. Our farmers are entrepreneurs, they’re risk-takers, they, in effect, are running a business, trying to feed the world. They wear a lot of hats. And they’re incredibly smart and talented people. What you find is that our farmers leave their most productive land in production and their least productive land, that’s the stuff that goes into solar. So, you know, the land that might have produced 4 ears of corn an acre, that becomes the solar field.”

Donnelly adds that a little bit of farmland converting to solar goes a long way.

“Counties have the opportunity at any time in their land ordinances to say, ‘Look, we don’t want any more than 2 percent of our county’s farmland to be in solar. It’s up to the individual counties. And that minimal percentage helps to create clean energy that helps to provide the opportunity for your children and grandchildren to live in a cleaner world.”