Former USTR Ag Negotiator: We Need to be More Clear with China 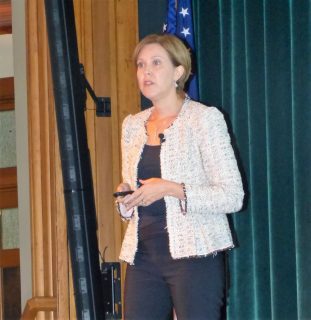 Soybeans rallied on Tuesday in large part because of the potential for renewed talks between the US and China regarding trade (though they could not sustain that progress on Wednesday). Bloomberg has reported that Treasury Secretary Steven Mnuchin has been having private conversations with a Chinese official in hopes to get them back to the negotiating table.

Darci Vetter worked as the Chief Agriculture Negotiator for the US Trade Representative under the Obama administration. She told Hoosier Ag Today that this isn’t the first time intellectual property theft has been discussed with China, and there are a number of countries that are just as upset about China’s trade practices as the US.

“It is frustrating. And we weren’t able to solve it in some of the ways we had wanted to in the last administration. But choosing to go it alone by imposing tariffs on China in retaliation for that theft of intellectual property gives them an opportunity to sort of play us off against our allies, many of whom share our frustration.”

In addition to working with our allies to gain better leverage, Vetter believes we need to be more clear with China about what the end goal should be.

“We’ve told China that the trade deficit is the problem and they need to buy more of our products. We’ve said that its intellectual property policy that is the problem, and we’ve suggested they need to fix some of their other regulatory barriers, but it’s not really clear which is our ultimate priority. Which are the things we’d like them to fix first? Completely reforming their intellectual property system is a pretty big task.

Vetter believes that in order to get back to the negotiating table, “We made the first move when it came to tariffs, so I think in some ways we have to make the first move to say, ‘Let’s talk, and figure this out, and find a path forward.’”