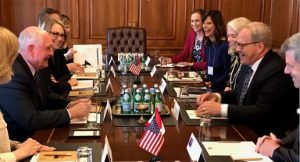 Monday U.S. Secretary of Agriculture Sonny Perdue completed a trip to Toronto, marking his first international trip as secretary.  Perdue conducted a series of meetings with Canadian officials, including Canadian Minister of Agriculture and Agri-Food Lawrence MacAulay and current Premier of Ontario Kathleen Wynne, regarding bilateral trade issues of importance.  Among other issues, Perdue raised the topic of American ultra-filtered milk that has been a point of disagreement between the U.S. and Canada.

Perdue also participated in a celebration of the 10th year of the Southeastern United States-Canadian Provinces Alliance (SEUS-CP), an organization meant to foster mutually beneficial relationships Perdue helped found as governor of Georgia in 2007.  Perdue participated in a “fireside chat” regarding SEUS-CP with former Premier of Quebec Jean Charest.

Following his meetings in Canada, Perdue issued the following statement:

“We had very good, very candid discussions, very frank, like family members discussing some things that are not necessarily comfortable.  We laid out a great framework to begin renegotiating NAFTA.

“I was able to describe the issues that we feel are important to resolve – and can be resolved – as we begin to renegotiate NAFTA.  That has to do, obviously, with the dairy issue and the wheat grading issue that deals with feed grade wheat that’s not grown in Canada.  And also certain provincial wine issues, where wines are not displayed out in front where other Canadian wine is.

“It was not the purpose today to enter into deep negotiations back and forth, but to lay out the issues that we had concerns about.  It’s not our purpose to try to manage or try to get involved in their internal supply management regarding the dairy industry.  The ultra-filtered milk was not included in NAFTA.  And I made it very clear that the Class 7 designation we felt was an unfair undercutting of the U.S. industry that grew up south of the U.S.-Canada border.  It cut these producers and this industry out of shipping the ultra-filtered milk into their cheese industry, which was in demand in Canada.  I also said, if you want to manage your dairy supply with supply management, that’s fine.  You just need to manage it and not overproduce to create a glut of milk solids on the world market that’s being dumped at unfair prices.

“While we didn’t try to negotiate back and forth, I think it was clearly understood that we consider all options on the table and we’ll pursue them in the best interests of U.S. producers.”