Frogeye leaf spot (FLS) is becoming a serious threat to soybean production in Indiana and surrounding states. Traditionally a southern disease, it can cause yield loss up to 60%. In recently years, FLS severity has been on the rise in the North Central region. It caused estimated yield loss worth $51 million in Indiana and $428 million in the North Central region in 2018.

FLS infection can occur at any stage of soybean development, but most often occurs after flowering. Initial symptoms are small, dark spots, which will eventually enlarge to a diameter of up to about ¼ inch. The centers of the lesions become gray to brown and have a reddish-purple margin.

Stems and pods can also be affected later in the season. Symptoms on stems are long narrow dark lesions with flattened centers. Pod lesions will be circular to elongate, slightly sunken and reddish-brown. Seed symptoms will appear as gray and brown areas on the seed and which can be blotches to specks on the seed coat. Infected seed can have cracked and flaking seed coats. Seed symptoms can be confusing with those caused by some other fungi. 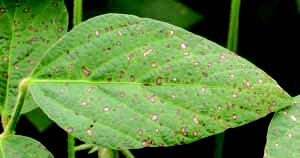 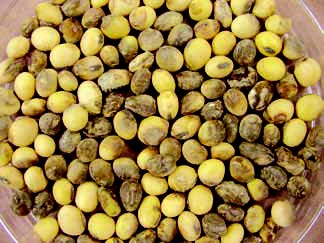 Dr. Guohong Cai, an USDA/ARS plant pathologist and an adjunct faculty at the Botany Department of Purdue University, has been funded by Indiana Soybean Alliance to conduct a survey of FLS in Indiana. Among other things, he will study the race, fungicide resistance and mating types of the causal pathogen, Cercospora sojina. Different sources of resistance can be used to counter different races of the pathogen. Fungicide has been used to control FLS, but QoI resistance has been reported in Indiana. Two mating types have been reported in this fungus, MAT1-1 and MAT1-2. Existence of both mating types in a field has the potential of leading to higher virulence.

If you have FLS problem in your fields, please consider sending samples to Purdue. Pick 5-10 pods or seeds suspected of being infected by FLS from each field and put them in a small envelope. Since it’s late in the season, it may be difficult to find leaves and petiole infected by FLS, but if you can, leave and petiole samples are welcome too. Put the samples from each field in a separate envelope and label the field location. Dr. Cai will return to the race, QoI resistance and mating type information back to you when they become available. The collected pathogen isolates will also be used to screen soybean germplasm to identify new source of resistance for breeding effort.

The samples should be shipped to: