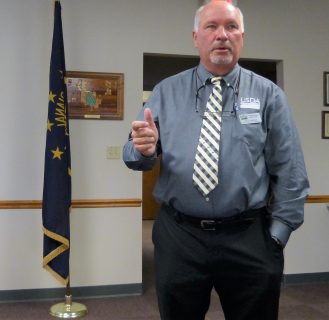 Indiana Farm Service Agency offices are quite busy these days as signups for the Market Facilitation Program are underway. Indiana FSA Executive Director Steve Brown said there were some blips in the system at first, but things are moving smoothly now to get producers signed up for MFP. He was in a county office last week that had already signed up 157 producers.

“We’re still working things out, but we’re anticipating making payments mid-August to late August. So, I think that’s given producers some urgency to come in and sign up.”

In addition to MFP, Brown says he can’t remember a time in his 35 years with FSA that they’ve had more programs running simultaneously.

“We just wrapped up with crop certification and we still have some certification going on. We’ve got reconstitution for producers making farm changes. We’ve also got continuous CRP signup. We’ve got the DMC Dairy program signup, and we go (this) week to Phoenix for some farm ARC/PLC training which we’re anticipating that starting September 1. Then, around December 1, we’re thinking a general CRP signup could be announced.”

Staffing has been an issue in FSA offices across the country. Brown says in Indiana the staffing situation has improved recently.

“We’ve got some additional staffing and we’ve improved on that. We’ve been given dollars for temporary office help, which we’re utilizing. So, (FSA employees) are working really hard. We certified 40% of our farms in the last 2 weeks of crop certification. So, that’s a shout out to our employees statewide. They did a tremendous job.”

Signup for the Market Facilitation Program continues through Dec. 6.