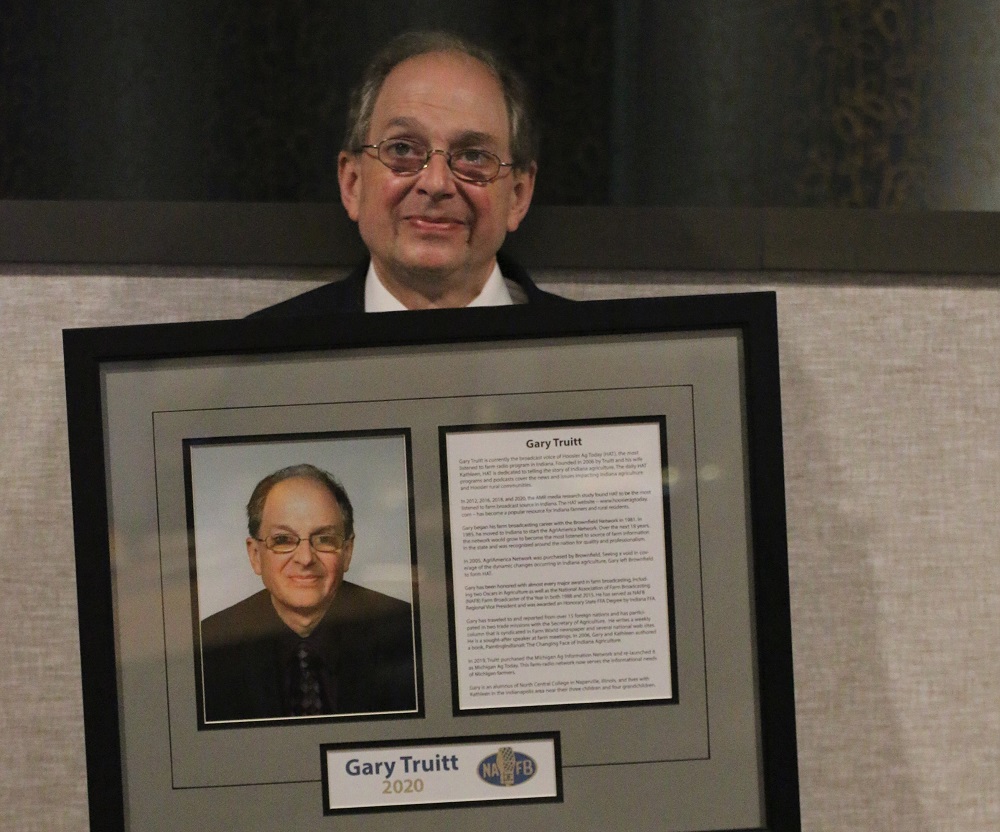 It’s now official, Gary Truitt is a member of the National Association of Farm Broadcasting Hall of Fame. The founder of Hoosier Ag Today, Michigan Ag Today, and co-founder of the Indiana Farm Equipment and Technology Expo was honored by staff and family with a surprise in-person event on November 10th where he was presented with the award and delivered his acceptance speech.

“I have watched some of the legends of our industry as well as a lot of good friends receive this honor,” he said. “To be included in this group is truly humbling, and so I really appreciate this honor in a very deep and personal way.”

Then Thursday night during the NAFB virtual night of honors, the speech and biography video were played across the country.

Maybe Gary’s career was predestined as far back as his senior year in high school when he took a vocational aptitude test that came back with surprising results.

“It told me I was best suited to be either a preacher or a farmer,” Truitt said. “Now, I thought that was pretty funny at the time because I had no experience in either category and no desire to have a career in either of those fields. I wanted to play rock and roll on the radio. Many years later when I find myself entering the field of farm broadcasting, the results of that test came back to me and I have to admit that maybe those tests were a little more accurate than I originally gave them credit for.”

Early in his career he did play rock n roll on the radio, but the farm broadcasting bug arrived and bit him hard. Nearly 40 years later he is still motivated by the same thing that first hooked him.

Just as farmers dedicate their lives to their craft to the benefit of us all, Gary Truitt has dedicated his many years in Indiana, and now Michigan, to serving farmers. He has served them well. His work has long been admired by his peers across the country and state and national agricultural and political leaders, not to mention operators of farm operations both small and large.

And the staffers who work with Gary also admire the work he has done and the strong company he has built. Congratulations Gary Truitt, a true farm broadcasting hall of famer!