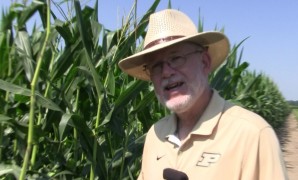 Throughout much of Indiana the corn and soybean crops appear to be in excellent shape, having benefitted from a good spring into summer growing period. Even though many areas now need some good rainfall, in the latest Better Farming video Purdue Extension corn specialist Bob Nielsen says those good looks are not deceiving.

“One probably big exception would be that area up in the northeast where it’s pretty dry. I was up east of Ft. Wayne and as I was driving through that area and coming back, there’s some noticeable drought stress in both crops in that area. It’s hard for me to get a grasp on how many acres we’re talking in that part of the state, but certainly on a statewide basis the USDA numbers still put this crop at essentially three-fourths good to excellent. That may not put us up in the stratosphere but it certainly puts the crop up with some of the better crops we’ve had in recent years.”

With the exception of those dry areas he said conditions were very good during pollination this year.

“We really have not had exceptionally hot days. Except for that area in the northeast, by and large this crop has had timely rainfall so soil moisture has been good,” Nielsen said. “The crop has not been under very much drought stress statewide. The leaf health is exceptionally good. Very little leaf disease developing so far, and we always have to sort of knock on wood when we talk about disease, but the crop was healthy. We’ve not had a lot of excessive rainfall this year like we did last year, so we’ve not lost as much soil nitrogen, which means the crop is healthier because of that also.”

Nielsen discusses determining yield for the current crop and more in the Better Farming video from Hoosier Ag Today and the Purdue Center for Commercial Agriculture, made possible by Hoosier soy growers and their checkoff, Indiana Soybean Alliance. See it at the HAT YouTube channel.