A Glimpse into the Future of Agriculture

A mind-expanding look at how technology will change the way we farm was the highlight of the Midwest Pork Conference in Danville on Tuesday. Dr. Lowell Catlett, a nationally known futurist, painted a picture of how today’s cutting-edge technology will change the way we live and farm in the not too distant future. He predicts rural America will be changed by the adoption of a smart grid that manages the energy and data that our farms and communities will need. Despite the slow pace of broadband growth in rural areas, he feels the change is coming, “I have talked with state lawmakers across the country and they understand that this change is necessary.” He feels the REMC system, which is the backbone of delivering electricity to rural communities, will be the basis for delivering data and managing energy distribution.

This change will bring robots and self-driving farm equipment to our farms. Catlett believes farmers will eventually adopt this new technology, “I believe in the 10 X rule. When technology becomes 10 times better or 1 tenth the price, people suck it up real quick.” He pointed to the example of mobile phones, “We sucked up cell phones real quick because they gave up the mobility we didn’t know we needed.” 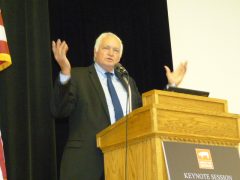 Catlett described to record crowd of pork producers at the Hendricks County Fairgrounds and Conference Center that advances in robotics, computer power, and artificial intelligence will change the way farmers farm and that food is produced and distributed. He noted that we are already seeing how data driven systems are changing the way we farm, “Today we are planting corn and soybeans by the linear inch. We have variable planters and data driven algorithms that allow producers to pick the right seed for the right spot in his field. We are also able to do something similar with livestock with the new sensors that allow us to understand each animal metabolism in a way never possible before.”

While some of Catlett’s predictions seem a bit overwhelming, he noted the one good thing about the future is that it arrives one day at a time. 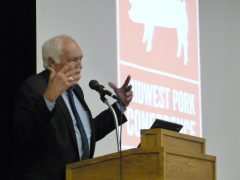 Dr. Lowell Catlett, was a Regents Professor in Agricultural Economics and Agricultural Business and Extension Economics and the Dean of the College of Agricultural, Consumer and Environmental Sciences at New Mexico State University until he retired in 2015. Dr. Catlett received his doctorate in Economics from Iowa State University, and has twice received the Don C. Roush Award for Excellence in Teaching. He is also a recipient of the prestigious Burlington Foundation Faculty Achievement Award for Outstanding University Teaching. In 1994 he was one of two Western Regional recipients of the National Association of State Universities and Land Grant Colleges “Excellence in College and University Teaching in the Food and Agricultural Sciences Award.”03/30/05: Lowell Catlett poses in his office. (photo by Darren Phillips) In February, 2007 he received the Carl F. Hertz Distinguished Service to Agriculture Award from the American Society of Farm Managers and Rural Appraisers for his service to agriculture. In addition to his selection in 2002 as a member of the original class of six New Mexico State University Regents Professors, Dr. Catlett has received every teaching award the university offers, including the Westhafer Award for Teaching in 1990, New Mexico State University’s top honor. The professor of agricultural economics and agricultural business is internationally known as an expert in commodities futures markets and is in demand as a speaker and consultant on predicting and planning for near- and long-term futures. Lowell recently received the College of Agriculture and Home Economics Advisor of the Year as well as Teacher of the Year at New Mexico State University. He is a consultant to the U.S. Departments of Agriculture, the Interior, Defense and Labor. He has also been a consultant to many Fortune 500 companies.