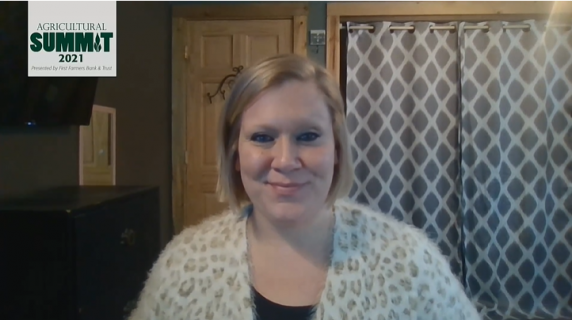 Angie Setzer, also known as the “Goddess of Grain” on Twitter, spoke to over 1500 people logged in to the First Farmers Bank & Trust Virtual Ag Summit on Tuesday to discuss grain marketing in this bull market.

She says it ultimately comes down to you having a plan.

“You need to have a general idea of costs, bushels likely to be produced, or at the very least an acreage breakdown. We need to know what needs to move when, and the percentage contracted at all times or have a good idea of that. You want to know your point of profitability and have a general idea of what your pricing targets are.”

Setzer says having that plan will take some of the emotion out of your grain marketing decisions. She adds that scale selling is the best method.

Setzer urges growers to start with a small percentage of crop at the point of profitability and continue selling as the market moves higher.

Setzer says you want to have those targets in place, but you want to make sure you adjust them if the information or outlook begins to change. It all comes down to having that plan.