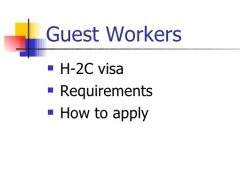 Goodlatte is a Republican from Virginia and his bill is the American Guestworker Act, or AG Act. It replaces the H-2A program with a new, flexible and market-driven guestworker program designed to meet the needs of the diverse agriculture industry. According to Goodlatte, the bill would create a new H-2C guestworker program under which foreign workers would be allowed an initial stay of 36 months. Subsequent visas for year-round agricultural jobs and all other H-2C visas would afford a work period of 18 months.

Representative Dan Newhouse from Washington state says while many of the details have yet to be worked out H-2Cs would take the agriculture community to a much better place.

“I think this will be a very good step forward,” he said. “Immigration reform is a huge issue and a day does not go by that I do not hear from someone who is having a difficult time attracting the labor force that they need in this harvest period.”

The AG Act would allow current undocumented ag workers to get an H-2C visa and provides for 500,000 H-2C visas a year with allowances to adjust that number depending on agricultural labor needs.

The program also would give employers the option to provide housing and transportation for their workers, currently required under the H-2A program.

In addition, the H-2C program would be administered by the USDA.

Duvall at Farm Bureau acknowledged the Goodlatte bill is a possible solution, but he would like some improvements made to it.

“Chairman Goodlatte’s bill also would allow, for the first time, dairy farms to participate in the labor program,” he says in an FB website column. “The bill needs some improvements (raising a cap on the number of worker visas, for example), but it would be our best chance in years to make progress on an issue that is difficult but also so important to farmers, consumers who want their food grown in U.S. soil, and rural communities that benefit from the jobs that farms and ranches provide. It is time for a solution to the ag labor problem, before more of our food—and the U.S. farms and ranches that produce it—goes to waste.”