Backed by red, green, and yellow tractors on the south law of the state capitol as freezing rain fell, Governor Mike Pence signed Senate Bill 308 into law.  The Governor told the crowd of farm leaders that this fixes a long festering problem in Indiana agriculture and brings stability and a measure of certainty to the Hoosier agricultural economy. “I was pleased to sign into law Senate Enrolled Act 308, and I’m thankful for the bipartisan support in the Indiana General Assembly who helped get these bills to my desk,” said Governor Pence. “Indiana is blessed to have a rich agricultural tradition that starts on the farm and extends to thousands of agribusinesses, and these bills will help ensure the Hoosier farmers and businesses across our state receive the tax relief they deserve, and can better work together on soil conservation practices across our state.”

“I commend the Governor, members of General Assembly, and all those involved with the passage of these two laws, which are major victories for Indiana agriculture,” said Ted McKinney, Director of the Indiana State Department of Agriculture. “We have nearly 60,000 farming operations in our state, so by making tax relief available, while strengthening our conservation efforts, these laws go a long way to ensure that Indiana agriculture not only remains strong, but also sustainable for future generations.”

The tax reform was the top priority for Indiana Farm Bureau, and, at a reception held inside the statehouse, IFB president Randy Kron  praised Farm Bureau members for making their voices heard, “Our message here at the Statehouse was very simple, our farmland property taxes are too high.” Kron said the tax break does not represent a special deal for agriculture, but simply brings parity with other tax payers in the state, “Senate bill 308 provided what farmers needed, taxes that matched their ability to pay and that are more stable.” He added by using current income data, adding the capitalization rate, and fixing the soil productivity formula,  farmers got the fix they needed. 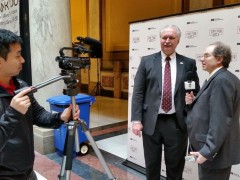 Kron told HAT that, during the just concluded legislative session, there were over 800 farmer visits to lawmakers, and that kind of advocacy helped get the job done, “Members found their voice in government by meeting with their legislators at the Statehouse and in their district.”  The bill signing culminates years of work by Farm Bureau to get the property tax system fixed in Indiana. According to Katrina Hall, INFB’s director of state government relations, “Today’s ceremonial signing of SB 308 was the culmination of years of their hard work and dedication”

Many other Indiana farm organizations were on hand for the historic occasion. Mike Nichols, a farmer from Spencer County and president of the Indiana Corn Growers Association, said, “We thank Governor Pence and the members of the General Assembly for enacting this critical legislation for Indiana farmers. Due to a broken formula, our property taxes continue to rise while our net income has fallen dramatically. This is not a special break or a handout, it is bringing the formula more in line with the economic conditions facing Indiana farmers. Farmers thank the Governor and legislators for this critical law.”

Jeanette Merritt, a farmer from Miami County and chair of the Indiana Soybean Alliance Membership & Policy Committee, said the new tax formulas take into account the drastic changes that have taken place in the farm economy, “As commodity prices have dropped radically, we’re being penalized for the success of the past. This bill comes at a critical time as farmers in our state face the reality of a depressed farm economy. Thank you to Governor Pence, Senator Hershman, and Representative Brown for their leadership on this critical issue and working hard for farmers.” 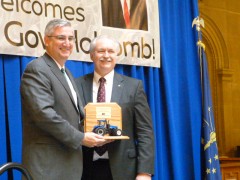 Following the bill signing, Farm Bureau held a reception to welcome Indiana’s newest Secretary of Agriculture, Eric Holcomb. As head of the Indiana State Department of Agriculture, Lt. Gov. Holcomb works to cultivate a positive environment for the producers of food, fuel, and fiber in the Hoosier state. “As the new Secretary of Agriculture, Lt. Gov. Holcomb has an understanding of the enormous role our industry plays in the state’s economy,” said Kron. “We look forward to working with him to make Indiana the best place in America to live, farm, and raise a family.” Kron presented Holcomb with a scale model New Holland tractor.

You can watch the video of the Governor’s bill signing at our web site.