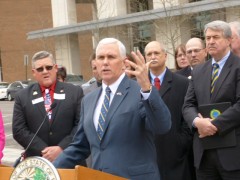 Improving broadband coverage in rural areas has been a top priority of Indiana Farm  Bureau and the Indiana Soybean Alliance. On Tuesday, Governor Mike Pence announced a new program that will help speed the coverage in rural areas The State of Indiana has decided to lease its network of towers around the state to a company that will help spread high speed internet coverage to rural areas.  “This agreement, if approved, will put underused assets into full play, enhance Indiana’s communication capabilities throughout the state, and fund the state’s bicentennial projects,” said Governor Pence.

State Department  of Agriculture Director Ted McKinney told HAT this will significantly move broadband coverage forward in rural Indiana, “In order for agriculture to grow and thrive in today’s economy, as well as to remain competitive globally, Hoosier farmers and agribusinesses need access to reliable broadband. From collecting real-time data on crop yields to taking full advantage of modern agricultural technologies, connectivity plays an important role in the industry today, so by extending broadband availability in rural parts of the state, this plan is a major step forward for Indiana agriculture.”  McKinney said that a similar plan has proven successful in Ohio and that  Indiana officials felt it would work in the Hoosier State as well.

Mike Nichols, a farmer from Spencer County and president of the Indiana Corn Growers Association, released the following statement in response to today’s announcement by Governor Pence on the $260 million agreement to lease state communications infrastructure to expand Indiana’s rural and agricultural broadband and wireless services: “Availability to broadband has been a limiting factor in our rural communities for years and this move opens up great possibilities for our farmers, ag businesses and others around Indiana.”

“This agreement will result in much-needed broadband to many rural communities across the state that are currently underserved, helping them develop and amplify the quality of life and quality of place critical to economic investment” said Lt. Governor Eric Holcomb. “Expanded broadband is an important tool for rural communities to  attract, retain, and retrain talented Hoosiers and recruit quality employers.  I commend Agile Networks for recognizing Indiana’s unmatched economic and business climate for their investment.”

Details are still sketchy, including how many towers are involved and what areas will be covered by the new service. McKinney hopes those details will be available soon and that improved covered will begin to reach out to rural areas in the next few years.

According to the terms of the agreement, Ohio-based Agile Networks will pay Indiana an initial upfront payment of $50 million to manage, operate and, market the state’s communications infrastructure, and pay the state an additionally anticipated $36 million in revenue share over the initial, 25-year term of the deal. If Agile Networks opts to renew the agreement for an additional 25-year term, it will pay Indiana an additional up-front payment of $10 million, plus an additionally anticipated $164 million over the renewal term.  “This expansion will enhance broadband service as Agile Networks’ open access model will give wireless carriers and providers the ability to easily enter new urban and rural markets,” said Micah Vincent, Director of the Indiana Office of Management and Budget.