Grand champions were announced Sunday night at the Indiana State Fair 4-H Grand Drive Presented by Farm Credit Mid-America. Young winners were the story of the night, including one 10-year-old that won Grand Champion Market Barrow and Grand Champion Beef Steer. Randolph County’s Hadley Hendrickson is about to start 5th grade and was overwhelmed after her big wins.

“I am really happy. I’m just…I am just wow! I worked my butt off every day and it’s all led up to this. I feel so proud of everyone that’s helped me, and I thank everybody who supported me, and I love my family.”

The only exception was Lane Slayton from Hamilton County. Slayton is going to be a high school junior next year at Hamilton Heights, and he won Grand Champion Sheep in back-to-back years.

“It takes the same hard work. Just because we won it last year doesn’t mean that it was a given this year. It’s still the same equal work, if not more. This one was special from the beginning, just like last year’s, and (the hard work) paid off.”

Slayton has hopes of not only coming back next year but has plans for after high school that could bring him back for years to come at 4-H events.

“I plan to go to a school where I can livestock judge and then, hopefully, major either in animal nutrition or animal chiropractics.” 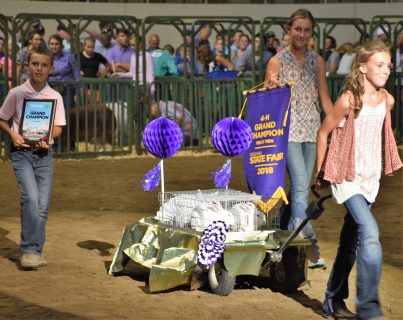 Second place was awarded to the following: