President-elect Trump’s pick for EPA chief Scott Pruitt recently reassured U.S. senators from Midwest farm states that he will follow the law on renewable fuels, Waters of the US and other issues key for agriculture. He said he will support the rule of law that underpins so much of what EPA does that impacts agriculture, and that was welcome news to Iowa Senator Chuck Grassley.

“We got a very positive response of his not just support of the RFS, but more importantly the rule of law, and rule of law is what Congress passes the EPA is supposed to follow and not back it down the way they have in this administration,” he said.”

Grassley and many lawmakers from rural states complain the outgoing EPA sold the RFS volume targets short until last year and overreached its rulemaking authority in clean air and clean water actions.

The long-fought Waters of the US rule to vastly expand EPA control of water on and off farms is now tied up in the courts, where judges are skeptical it will withstand legal scrutiny.  Congressional Republicans failed to override President Obama’s veto of a repeal bill. Grassley stressed the importance of following the law.

“There’s one thing that’s very key. I don’t want somebody in EPA that’s going to continue the illegal and ultra vires standards setup by this administration not following the law. We’ve got positive comment that the law is going to be followed. That’s very, very important.” 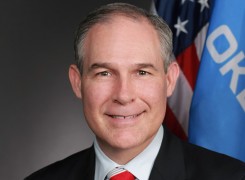 Pruitt, as Oklahoma Attorney General, joined other state counterparts to sue the EPA over WOTUS and, if confirmed to head the agency, would obviously back Trump’s pro-ethanol, pro-jobs agenda.

He’ll wait until after Pruitt’s confirmation hearings to decide if he’ll support the nominee, but so far, Grassley says he hasn’t heard anything that would discourage him from voting for Pruitt.

Grassley is like many in agriculture. He has grown very weary from the lack of a USDA pick from the President-elect, and Grassley took to Twitter over the weekend to make a recommendation of Bill Northey for the post. Northey is the Iowa Secretary of Ag now in his third term of that elected office.

US, EU Reach Deal to End Trade Dispute Over Subsidies