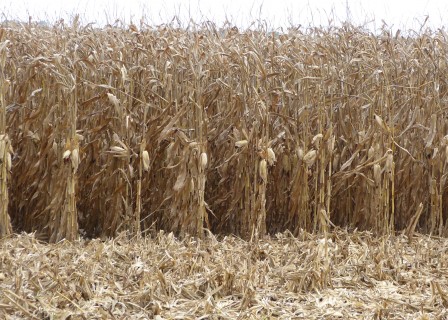 There has been a lot of chatter in August about harvest coming early this year. That still appears to be accurate for many Hoosier farmers, including those in northeast Indiana.

“We had good planting conditions about the last part of April, first part of May,” says Dave Colbert, Indiana based DEKALB/Asgrow technical agronomist, “and that corn has progressed very, very well, and probably will be on or a little bit ahead of schedule when we come to harvest. Growers can expect a little bit of tip back in some of that corn because we did have some hot night conditions right around the end of pollination.”

It’s a slightly different story where fields didn’t get planted until late May.

“That corn is just a little bit behind, probably not as far progressed, so it’ll be more on track for harvest, or maybe even a little bit later.”

Gray leaf spot pressure is prevalent this season. Colbert says in many cases the pressure is above normal and it could result is some yield loss.

“We saw it coming in in late June,” he told HAT, “and it progressed. We had a lot of moisture and humidity and high temperatures, and it actually progressed up the plant quicker than a lot of growers anticipated or thought they would see. So, in that case we will see gray leaf spot maybe take a little bit of the yield off of some hybrids if they got a lot of gray leaf spot through the upper canopy.”

The DEKALB Disease Shield hybrids have done a good job this year in the midst of that added pressure.

“Disease Shield products are doing very, very well,” Colbert said. “They’re kind of a comprehensive plant health product. They start out with the highest yield in their class, so they’re always selected for yield first. But secondary, they have very good stay green harvest appearance, very good late season stalks and roots. On top of that we look a little bit deeper at their overall disease package for gray leaf spot, northern corn leaf blight, and anthracnose stalk rot. These products aren’t immune to those diseases, but they tend to handle the diseases very well and minimize the progression on the plant.”

He says the longer you keep the plant healthy, the longer you have grain fill and send energy to each kernel. Based on in-field evidence, Colbert expects very good yield results for those products this year.

As harvest nears, or begins for some, Colbert says keep your eye on your fields.

“Always keep your eye on stalks. If a field gets ready sooner than you think it should, check the stalks because that means you could have had some cannibalization out there.”

Knowing the stalk conditions might mean you rotate the order of fields for harvest.