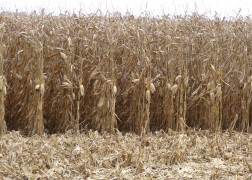 Corn and bean harvest is a bit behind pace this year, but there are some really incredible soybean yields being reported. Most farmers are not expressing disappointment about early harvested beans. HAT chief meteorologist Ryan Martin has talked with quite a few, and it’s just the opposite of disappointment.

“The lowest yield number I’ve heard is down around 48-50 bushels to the acre,” he said. “That guy said well maybe I’m a little bit disappointed but generally speaking we’ve been hearing yields 60-75 and even 80 bushels to the acre. The best I heard was a triple digit number coming in portions of Wabash County, around 60 acres. It was a combine yield monitor number, but still we did see a big number there. Nobody disappointed to this point, but we’re waiting for the longer season beans to get ready.”

There was also a report from Hendricks County of 44 acres going just over 100 bpa on ADM scales. Illinois and Iowa bean yields are also hitting the 80’s and 90’s in some spots.

Indiana harvest is already lagging a little and Martin says weather ahead of us won’t impact harvest too much. But it won’t speed things up either. 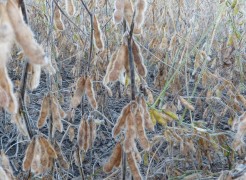 “We are going to be sitting underneath an upper level low that circulates through, keeping cloudy, somewhat damp and somewhat dreary conditions around. But even through Wednesday while underneath that low we did see sunshine peeking through at times. Rain amounts are not going to be overly spectacular, but just kind of a damp feel. Now we do see a nice window of opportunity with regard to the weather from Sunday through about next Wednesday morning to midday. After a front comes through Wednesday-Thursday I think we have another 5-6 day dry window where we can get things done following through next weekend and into the week after next.”

Martin says it is not likely that Hoosier farmers will catch and surpass the average harvest pace at least in the next couple of weeks.