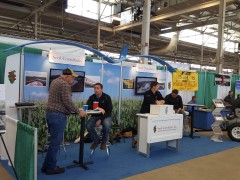 Poor weather and a poor farm economy kept attendance down at the just completed IN/IL Farm Show. But, for the growers who braved the cold and snow, it was a chance to discuss plans for the 2017 crop. Regional sales manager with Seed Consultants Brian George said, despite all the talk about more soybeans being planted, growers are anxious to get back to their regular rotation, “They want to put agronomics ahead of economics in 2017. They want to plant something to help with the diseases and just getting the best crop possible in the field.”

Another decision being considered by growers is how much protection they really need. George says, in some cases, a producer can get away with fewer traits in his seed, “When we talk with growers, we ask them what kind of soil they have, what kind of rotation they have, and if they have a steady rotation we are leaning toward not needing all the protection that they have normally been planting.” He added this is an option more and more producers are considering as they work to lower production costs in the new year.

In 2016, stalk integrity was a major concern among corn growers, with resistance to molds an issue in soybeans.  George says that is a concern for 2017 but will not likely guide decisions on seed choice, “It is something guys are talking about and thinking about, but you need to keep in mind these were one year issues and may not be back.  It may only become a serious issue if the situation recurs year after year.”  He is urging growers to look at 2 and 3 year data when assessing if a hybrid or variety is good for them.