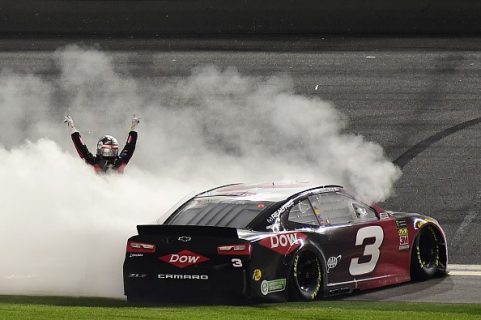 On Sunday evening, Feb. 18, American Ethanol driver and spokesperson Austin Dillon secured a historic Monster Energy NASCAR Cup Series win, driving the legendary No. 3 car to victory in the Daytona 500 at the Daytona International Speedway. The win was the second Cup Series victory of Dillon’s career, with his first coming last season in the Coca-Cola 600 at Charlotte Motor Speedway.

“This is an amazing accomplishment and a monumental victory for the No. 3 team,” said Growth Energy CEO Emily Skor. “The Daytona 500 is so rich with history, and Richard Childress Racing taking home the checkered flag – in this race – in the iconic No. 3 car is truly a momentous occasion in the sport of NASCAR. Austin Dillon and the entire RCR organization have been phenomenal partners, and they are instrumental in telling the wonderful story of American Ethanol to race fans and drivers across the country and around the world.

“We are incredibly proud of Austin. He is one of NASCAR’s brightest stars and most exciting athletes, and more than anything we are thrilled for him. He and his team have worked very hard for this moment, and we are overjoyed to see them standing in Victory Lane at the biggest race in NASCAR. We look forward to continuing on this amazing ride this season with Austin, the No. 3 team, and Richard Childress Racing.”

The No. 3 car – and all NASCAR race cars – are powered by Sunoco Green E15, a fuel made with 15 percent American ethanol. In fact, E15 has powered NASCAR for more than 11 million miles. E15 is a cleaner-burning, high-performance fuel that delivers on the race track and for regular drivers alike. From the intense demands of a NASCAR race team to the everyday reliability expected by drivers across the country, E15 is always a winner.