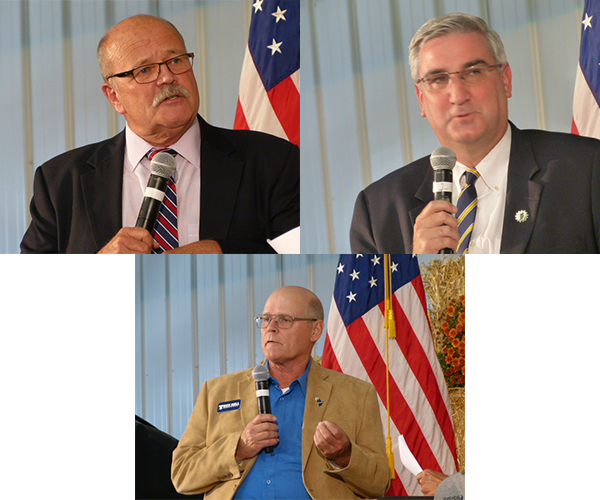 Indiana’s three candidates for Governor each made their case to a group of Indiana Farm Bureau leaders this week at the annual Before the Harvest event. In an excruciatingly, polite exchange, Republican Eric Holcomb, Democrat John Gregg, and Libertarian Rex Bell all presented their positions on key agricultural issues. All three candidates were asked the same questions on topics that included property taxes, infrastructure,  livestock, environmental regulations, conservation, local government, forced annexation, and other issues identified as priorities by Farm Bureau.

Property taxes was where the candidates differed the most. Eric Holcomb saying the reforms made in the last session of the General Assembly fixed the problem and that no new changes were needed, “We are seeing property taxes coming down from the double digit gains of the past so, we are on the right path.” Holcomb praised Farm Bureau members for their lobbying efforts at the State House this past session on behalf of property tax reform.

John Gregg said property taxes, along with all other taxes, need to be studied, “One of the things we propose is a study of the taxing system we have in Indiana, not just property taxes but all taxes.” He did not, however, make any recommendation on what, if anything, needed to be changed.

On most other issues, there was little disagreement between the candidates.  Holcomb advocated a stay the course saying Indiana agriculture is on the right track, “Agriculture is the spinal cord for the Indiana economy.” John Gregg said more money needs to be spent on broadband, infrastructure, and education, and outlined his plan for funding road repair and broadband expansion. Rex Bell said government needs to do as little as possible.

All the candidates supported the growth and expansion of the Hoosier livestock sector and were not in favor of regulations that limit the expansion of Concentrated Feeding Operations.  All three also supported township government, oppose a single county executive, and oppose forced annexation.

There was strong support for the FFA and for it remaining as part of the State Department of Agriculture. Rex Bill one-upped his competitors by saying he had married an FFA Sweetheart.

Both Gregg and Bell went out of their way to try and identify with the farm audience, stressing their rural backgrounds and farmland ownership. Gregg noted, if he is elected, he would be the only governor since the early 1940s to come from a farm.

Unlike Gregg and Bell, whose good ole boy approaches bordered on condescension, Holcomb presented a very businesslike approach with plenty of statistics  and a focus on economic development and the role that agriculture plays in it.

Indiana Farm Bureau President Randy Kron says it is important that farmers carefully evaluate each of the candidates and their stands on key ag issues.  Kron told HAT he was impressed with all three candidates and their knowledge about Indiana agriculture, “They did their homework and understand how important agriculture is.”  It remains unclear at this point if IFB PAC will endorse a candidate for Governor.

The event that drew several hundred people took place on the Starkey Farm in Brownsburg, IN. Following the candidates, Mike Starkey, who is President of the Indiana Association of Soil and Water Conservation Districts spoke at length on the need to improve funding for Indiana conservation programs. This will be an issue in the 2017 session of the Indiana General Assembly.