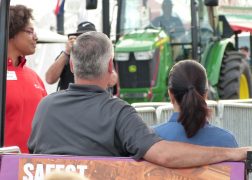 Friday morning opening ceremonies at the Indiana State Fair made it official, the Wonderful World of Food 2017 fair is underway. Indiana Governor Eric Holcomb spoke, often about the food and many types of pork available at the fair. State fair executive director Cindy Hoye welcomed the crowd, the new Subaru Skyride in the background prepared to give the first riders of the fair, the Governor and First Lady Janet, a look from overhead. The ceremony included music, with the state fair queen Becca Lax singing the National Anthem.

She was followed by a stunning version of Back Home Again in Indiana by Joe Martin from Indiana FFA.

But earlier in the morning, many of Indiana’s agricultural leaders gathered for the traditional Indiana Pork Producers ham breakfast.

“This is a breakfast that has been going on for over 30 years,” Jeanette Merritt, Indiana Pork’s Director of Checkoff Programs told HAT. “It is important to bring 350 of our ag industry friends, our elected officials, our government leaders, agency officials as well, to the fairgrounds. Give them some really great breakfast, pork items, and let people fellowship, visit with each other, but also hear from them what their vision is for Indiana agriculture and agriculture in Washington DC as well.”

Merritt agreed Governor Holcomb appears to be quite a fan of pork, specifically consuming pork.

During the event, another donation was made to the Feeding Indiana’s Hungry program.

“We actually house Feeding Indiana’s Hungry in the Indiana Pork offices and we think it’s important as Indiana pork farmers to make sure that no kids are going hungry,” she explained. “As farmers, we think it’s our responsibility to feed the world and we don’t take that lightly, so we want to make sure kids are going home and have a full belly when they are home at night. So, we’re happy to see First Farmers Bank and Trust donate $10,000 to FiSH, Feeding Indiana’s Hungry, and that money will be used to supplement some of the food banks around the state to make sure they have enough supplies for the communities they serve.”