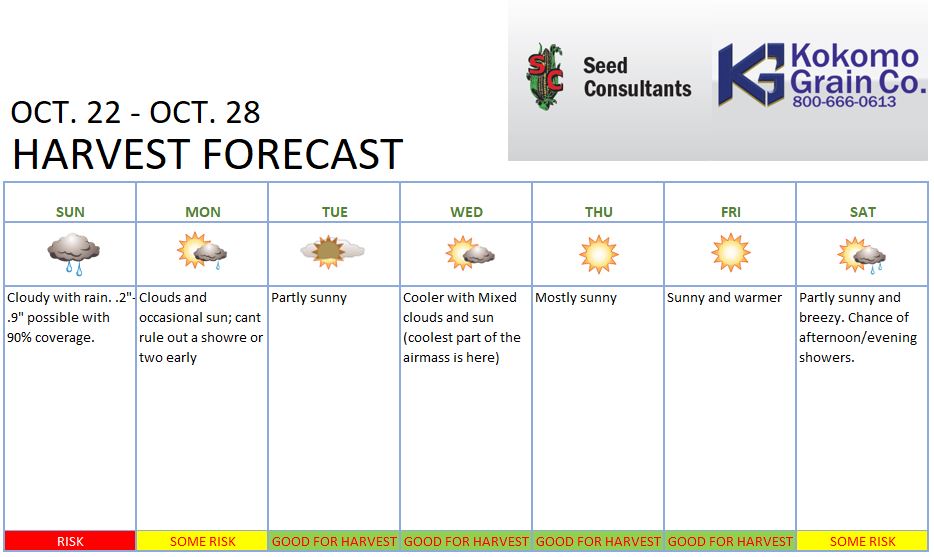 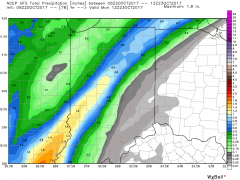 The last of our sunny, dry weather for this harvest window is in for Saturday. Strong southwest winds will allow for the excellent dry down over the state and we should see harvest roll on at full speed as the weekend starts. However, a front is moving into the western corn belt through the day Saturday and will be here for Sunday. The front looks to be significant enough to trigger a pause in harvest for at least a day or two. We are putting rain totals at .2”-.9” over 90% of the state. The rains kick off shortly after sunrise Sunday and go into the evening/overnight as the front sweeps through from west to east. The map above shows cumulative rain total potential over the state through Monday morning.

Behind the front, we have some diverging information to deal with. Our forecast continues to be for no new precipitation for Monday and Tuesday. There might be a lingering shower or two Monday morning, particularly in eastern and southeastern parts of the state, but our thought process to this point is that the front will sweep through just like a normal cold front would. Most models agree with our thoughts. However one still wants to bring another inch or more of rain into eastern Indiana and Ohio. We have kept our forecast drier with only one threat of rain for this weekend all the way through the past week…we are not changing it now.

Even with no new rain for Monday and Tuesday, we think that clouds will play a larger role. That will keep drying limited to start the week. The coldest part of the air mass coming in from this weekend’s front will be here Wednesday, and we expect temps to be actually a bit below normal for midweek. However, as sunshine returns for the second half of the week, temps will rise again, and we should be mostly normal to above normal for the rest of the 10 day period (this weekend and next week) outside of next Wednesday. WE have dry weather all the way into the start of next weekend.

We have a minor front coming in for next Saturday afternoon. Moisture totals look minor at only a few hundredths of an inch to a tenth or two. That front will pass overnight Saturday night into early Sunday, but we should see sunshine coming in quickly behind the front.

The extended period looks torn. The pattern really looks to want to get a little more active. But, the atmosphere does not seem to want to cooperate. We see troughs and fronts out west that just fall apart as they move east and run into strong upper-level high pressure. A minor upper-level system may pop up over the western Corn Belt around the first of the month, but similar to what we mentioned above, it seems to run out of gas before getting here. Our next system likely holds off until closer to the 4th, where we have a front that will try to bring .25”-.5” of rain to 70% of the state

Nothing earth-shattering here. Week 3 precipitation as we start off November looks to be below normal, as we still are dealing with the after-effects of dominant upper-level high pressure. Temps will be above normal, but will not be pushing to levels we have to see recently by any stretch of the imagination. For week 4, we get closer to normal precipitation, and we may even see a little above normal potential in southern and eastern parts of the state. Temps still are above normal but will be pulling back, leading to a thought that we can be seeing more normal and below normal days for the second half of November, especially after Thanksgiving.