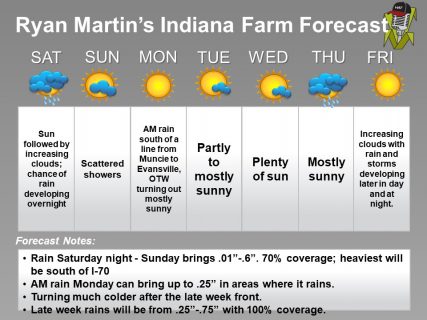 Sun will be followed by increasing clouds on Saturday as a frontal complex starts to work towards us out of the plains. This front loses a significant amount of punch before it arrives in Indiana. Still, we expect scattered showers to develop overnight, and then continue through Sunday. Rain totals will be from a few hundredths to .6”, and the heavier rain totals will be from I-70 south. Coverage will be around 70% of the state.

Monday starts with rain south of a line from Muncie to Evansville, and that rain can bring up to .25”. However, the action leaves quickly to the south and east, and otherwise we can expect partly to mostly sunny skies. Sun continues to dominate Tuesday through Thursday with temps normal to slightly above normal.

A strong front and low-pressure circulation is on the way for late in the week. However, timing is uncertain right now. We have to allow for rain in a 12-24 hour period at some point. We think late Friday through Saturday is more likely at this time, but the window of opportunity for the frontal passage runs from Friday through Sunday. Rain totals from the front will be .25”-.75” with 100% coverage. Stay tuned to HAT on air and online this week for updates on the timing. The front is showing a tendency to slow, because the low pressure turns out quite strong. The other thing the front brings, besides rain, will be a dramatic drop in temperatures. We expect much colder air behind the front. With clearing (and a likely full or near full moon), frost is likely over a large part of the state the subsequent morning or two after the front passes. Expect temps in that time frame to bottom out between 32 and 38 degrees. Interestingly enough, our climatological first frost date is normally right in this window, so if this verifies, we will have neither extended nor shortened this year’s growing season at all.

Dry for 4 days behind the frontal passage, taking us into the start of our extended window. Those 4 days will see normal to slightly below normal temps. The map below shows 10 day rain potential. 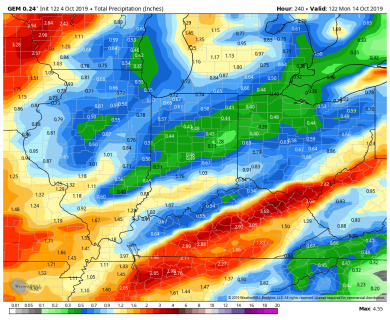 For the extended 11-16 day period, we have a small chance of rain in northern Indiana around Wednesday the 16th, mostly well north of I-70, limited to no more than a tenth or two, then better coverage rains for Thursday the 17th– but still no more than a quarter of an inch. We are dry to finish that week, but see a strong storm complex lurking off to the west that may arrive late the 20th into the 21st.

Week three has 1 frontal passage in it, but generally points toward slightly below normal moisture, but week four shows an uptick in moderate to heavy moisture potential as we switch from October into November. Precipitation likely swings to above normal. The two week average will be right at average, but still may lead to more harvest delay potential into early November. 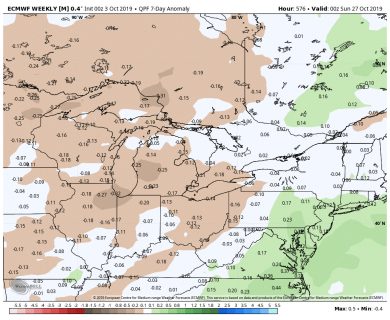 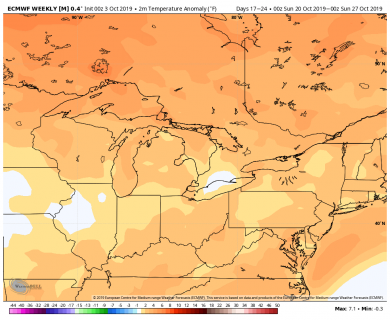 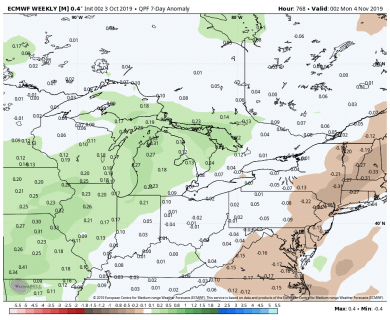 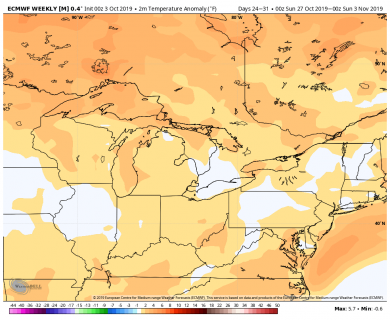 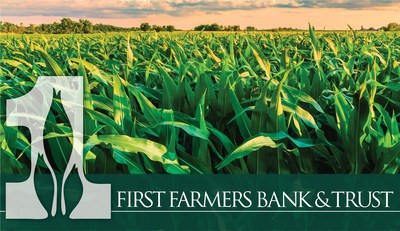 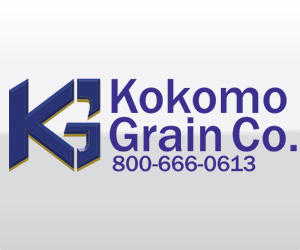