We start off our inaugural harvest forecast with a great early harvest outlook. Temperatures will remain well above normal through the balance of the weekend and the first half of this week. These warm temperature will be triggered by strong south flow over the region and will yield some records, and near records. In fact, temperatures through next Tuesday will be warmer than most of what August was!! We expect upper 80s and low 90s over most of the state. Relative humidity values will be lower through the period, even though we started with some pretty moist air in over the region as the warm air was building. The result will be excellent dry down, near maximum evaporation and drop in crop moisture levels. 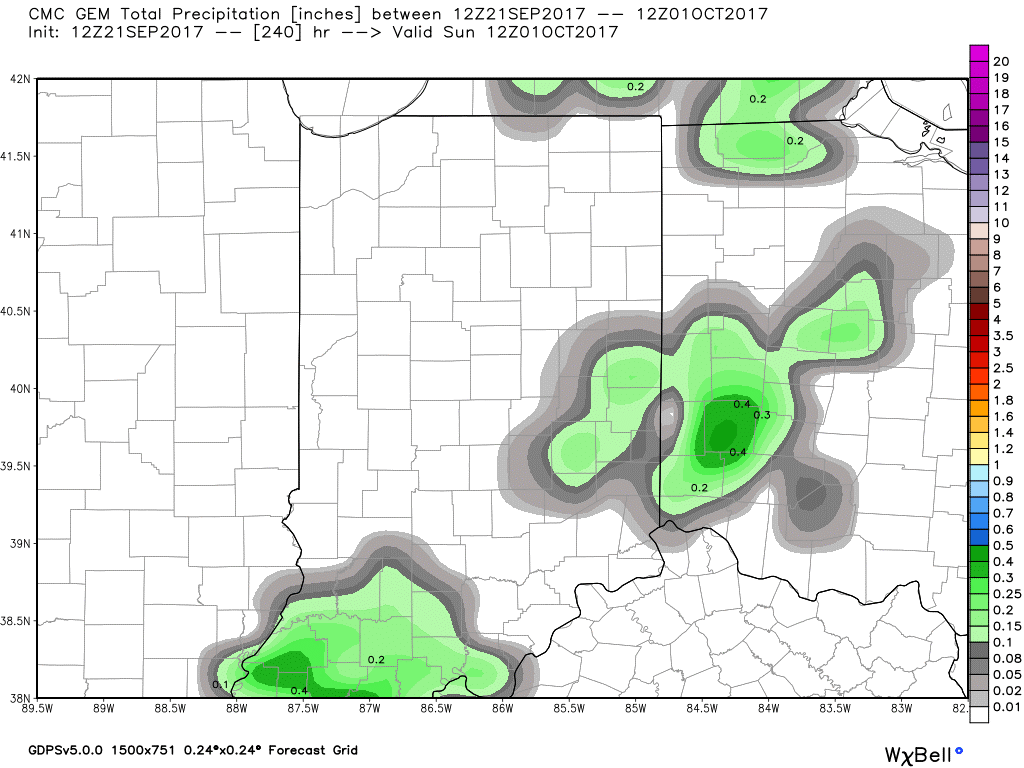 We see our next front arrive on Wednesday. This front will have looked much stronger back west as it crossed IA and the rest of the WCB. By the time it gets here Wednesday, it will not have much available moisture left and will have rained itself out for the most part, outside of our area. We are looking for clouds and just a minor threat of rains, perhaps with totals of a few hundredths to a tenth or two over about 50% of the state. This will not be significant enough to promote major harvest delays. However, what we will see with the frontal passage will be a dramatic shift in temperatures, back to normal levels at least, and there is a threat of slightly below normal temps. Keep in mind, normal temps are going to be a good 20 degrees cooler in some areas than what we will see to start the week…so even a move to “normal” will seem very, very dramatic. Those cooler temps will mean that the drying potential shrinks. Remember, by that time, the atmosphere will have become accustomed to holding much more moisture than the new cooler air mass will be able to hold. So, we look for some very heavy dew in the mornings late this coming week, and slower drying. Still, the harvest potential is great late in the week and into the coming weekend, basically through the remainder of the 10-day window. The above map shows cumulative precipitation potential through October 1!

The extended period, we have a continuation of a pattern that features upper-level high pressure in over southern Canada and the eastern US. We do have a minor disturbance working through the great lakes around the 4th that can trigger scattered showers in Michigan. We need to watch this for movement down into northern Indiana. But, at this time, that looks to be a minor concern. Later on, toward the end of the 11-16 day period, a stronger system moving across the upper Midwest might have a stronger front to swing through the state. This initially looks to bring up to .3” of rain, with 60% coverage. But the front also looks to have characteristics similar to the front we expect next week…which would lead to moisture being gone by the time it gets here. For now, we will paint that system as a “maybe”…and see how models want to handle it going forward. Overall, the extended period looks mostly favorable for harvest as well, at this point.

In week three (October 8th through 14th) we see a very cool start, with temps well below normal. If we are to see a frost, this will be the window that we see it (oddly enough…pretty much right in line with the first frost over a large part of the state). But, by the end of the period, we will have swung the temps back to above normal levels, significantly so. In fact, for week 4, we will keep temps about 5-10 degrees above normal for this time of year. One would expect that would promote good drying potential in the absence of heavy rains. Speaking of precipitation, in week 3 and in week 4, we continue to see the drier bias of this pattern. We will not call for the period to be completely dry, as we see a weak front around the 8th, and then a stronger front around the 16th. That second system could bring rains up to .75” and have good coverage. But, the rest of the week 3 and week 4 period will be dry, promoting an overall below normal skew to our precipitation outlook.