We start off our coming forecast period with mostly dry weather on Sunday. However, a minor disturbance moving across the great lakes is trying to bring a few scattered showers to northern parts of Indiana for the morning and midday hours. Moisture totals will be limited to a few hundredths to .15” from US 24 northward. The rest of the state sees nothing. Dry weather holds through Monday and early Tuesday morning. 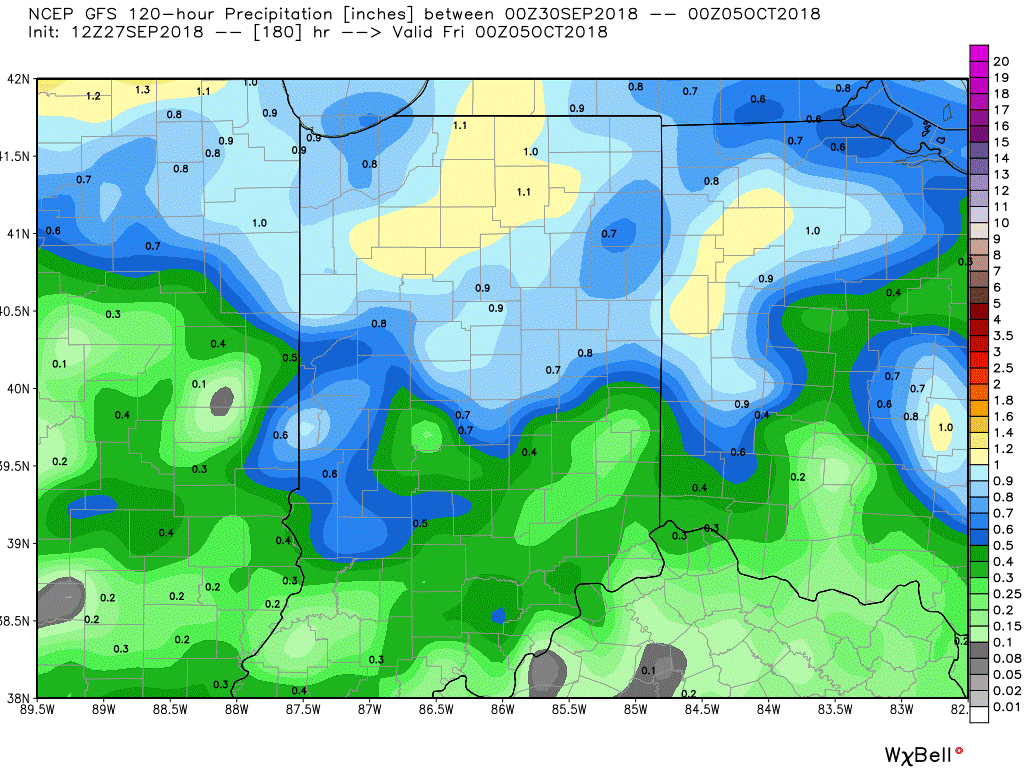 Our next system brings scattered showers for Tuesday. That should bring a few hundredths to .5” to about 60% of the state. The heaviest rains (near that half inch level) will likely show up in north central and NE IN. We are going to keep the second push of moisture from midnight Wednesday night through Thursday. That wave brings .1”-.5” to about 75% of the state. That front pushes through from NW to the southeast. All action is done by Friday, except down in farm southern parts of the state, near the Ohio River. There, we can see showers continue through midday and early afternoon Friday. The map above shows combined rains from the two systems next week.

The weekend looks cooler, and we may have trouble breaking the clouds up. We do not see a lot of new precipitation threats for Saturday and Sunday right now, but we also may be looking at a few hit and miss spits and sprinkles. The cold air really starts to drag in as the weekend finishes and we start the second full week of October.

The extended forecast still has a very strong front for the 9th-11th. Data suggests that the heaviest rains and the strongest part of the system will pass by to our west and north, but this far out, we would not jump on that solution yet. This system is very strong and could have some 1-2.5” rain potential with it if we hit the strongest part. We follow that up with another slower moving, but a less heavy system for the 13th, which could bring up to half an inch of rain, slowly lifting in from the SW. Temps likely cool off quickly behind the system on the 10th and 11th.

In week three we don’t see a lot of action throughout the week, but we do have a very strong front arriving toward the end of the period around the 19th. This front has rain potential up to an inch and a half and should bring another impressive cool push behind it. Week four settles down with high pressure in control for the most part. Temps will be below normal for both the week 3 and week 4 period, while precipitation is above normal for week 3, and near normal for week 4.