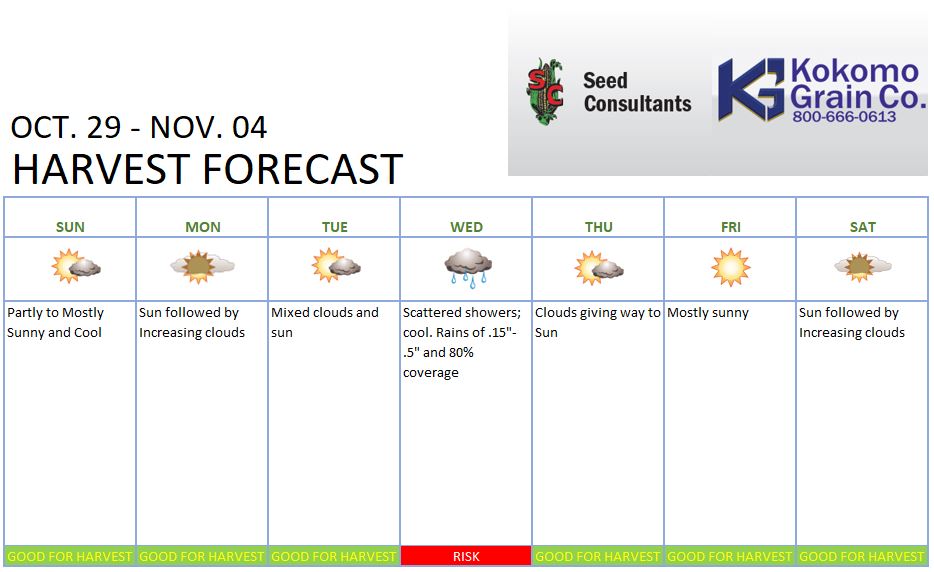 A mostly dry weekend kicks off this harvest forecast for Indiana. We have a mix of sun and clouds across the state and are set up for better sun on Sunday. A weak upper-level disturbance dragging across the Great Lakes may push a few clouds into the state as we work through Monday afternoon, but for now, we see no serious precipitation threat until we get to midweek next week and the arrival of our next front. With our most recent front getting out of here a little quicker, it looks like we may actually string together 4 days in a row of dry weather before our next system arrives. 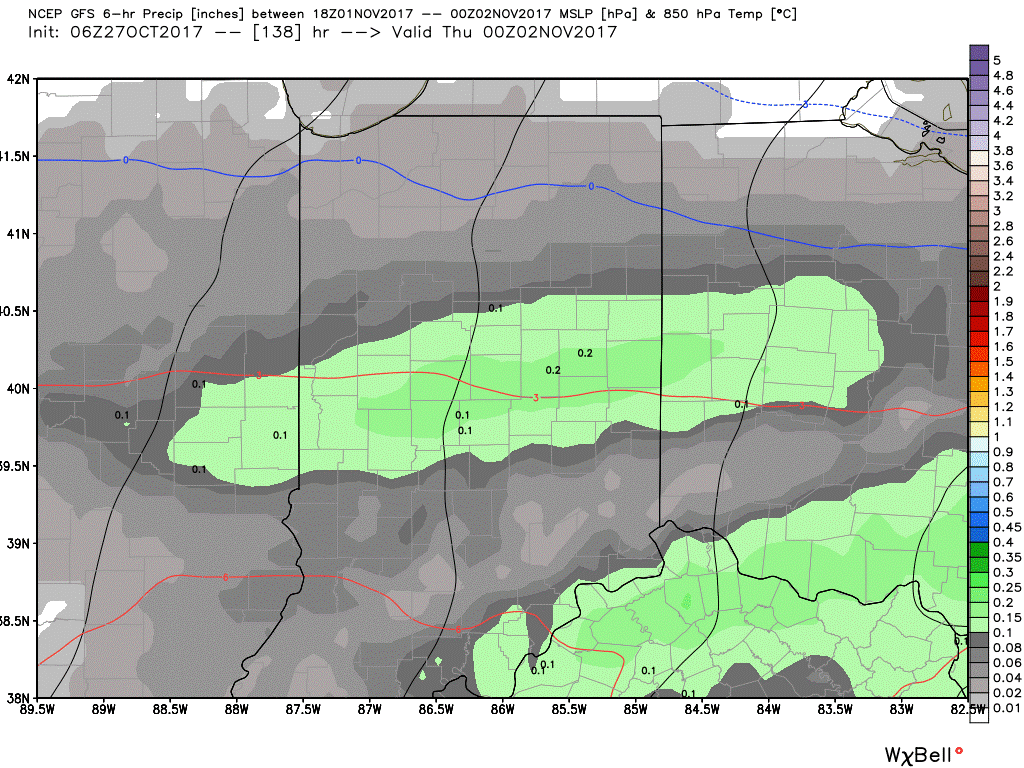 That next front pushes in for Wednesday and will have .15”-.5” spots of rain with it. We are putting coverage at 80%, but also think there is a chance that we can see that dip back closer to 60% by the moisture actually shows up. Rains push up into the region from the SW but will produce mostly light, gentle rains through the day. The action is done by nightfall, and we will see colder air and plenty of clouds in behind the system. The map above shows the potential set up for late Wednesday afternoon.

The clouds will slowly break up Thursday of next week, and the dry weather holds through Saturday, with sun dominating as the week closes and the weekend starts. Clouds will increase next Saturday as a strong front builds in from the west over IA, MO, and IL. The map above shows 1-week rain totals that include the front today and the front for midweek.

Temps through the upcoming period look to be near normal. After the solid frost earlier this week in many locations, the upcoming cool pushes for the week ahead do not look to be that much cooler than what we have already put on the books.

The extended period starts off very active. The front we see developing to the west as we close out the 10 day period comes rushing into the state in the first 3 days of the extended window. We expect up to 2 rounds of rain. The first round of rain in for Sunday the 5th, and there likely is a second round that comes as well late the 6th into the 7th. Combined rain totals will be from half to 1.5”, and the heavier push of rain is likely to come with the second wave. The first push shows characteristics of slowing or running out of gas over IL, so the timing will be the key thing to watch. We have had a storm complex in this time window for most of the past week. Fine-tuning its arrival will be where we go from here. The rest of the extended period looks dry from the 8th through the 11th, although we won’t completely rule out a few showers making a run at locations close to the Ohio River around Friday the 10th
Weeks 3 & 4:

For week 3 we have a minor front passing for the 15th into the 16th giving scattered showers. A strong low passes for the 18th and can bring .25”-1” rains. Temps for the entire week 3 period will be below normal, while precipitation is expected to be near normal.
For week 4, we have a significant cold front for the 21st, but it is not overly moisture laden. We do see it followed by a very strong High-pressure dome, which will likely bring a Canadian air outbreak over the region with it. Week 4 temps again look below normal, with near-normal precipitation.