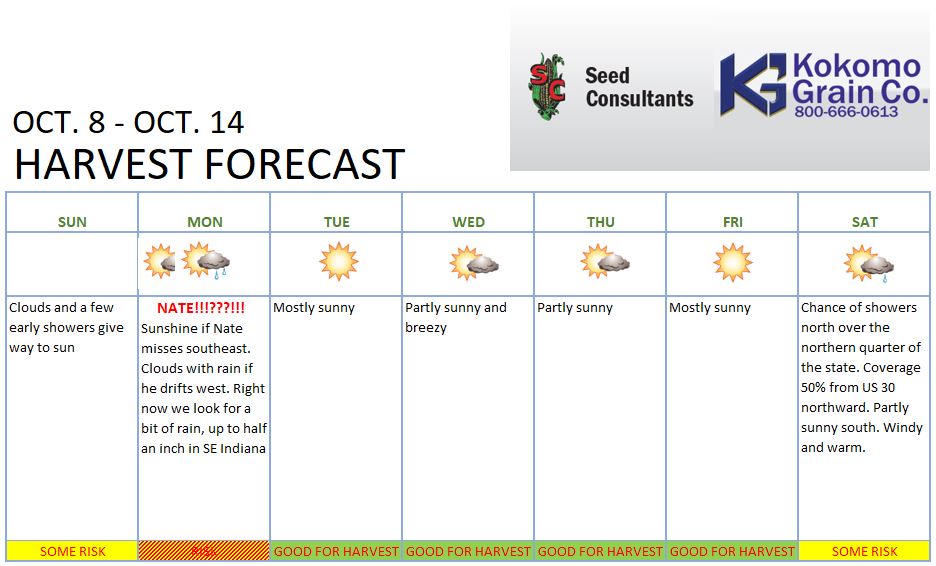 We will still be dealing with the last batch of moisture from our frontal complex as we start the weekend. On Saturday we can see rains of .2”-1.5” over 70% of the state. The best rains will be in central and southern Indiana, while NW Indiana may see nothing. Thunderstorms have the potential to be strong. But, everything should be done by late Saturday evening, and Sunday will be mostly dry over a large part of the state.

The big wild card for the start of this week is the remains of Hurricane Nate. This storm will make landfall along the gulf coast on Sunday and will quickly ride north while curving northeast. As the front that brings rain for Saturday slides off to the southeast, it will act as a nice little expressway for the remains of Nate to move up through the interior. Ohio will feel most of the brunt of this setup, but we won’t rule out some scattered showers and thunderstorms on the NW side of the storm circulation, working into southern Indiana on Monday, and perhaps as early as Sunday evening. The rains do not look super impressive, but may be able to bring up to half an inch of rain in over southern Indiana. Late last week several models wanted to bring the moisture much farther north, in Indiana, and one even had coverage of Nate induced rain at 80% of the state. However, we are looking at the tracks and thinking that the best rains will stay just outside of Indiana. Ohio will be very, very wet. But here, we think we miss. Tune in to our broadcasts and podcasts Monday morning for an update. It will be a very interesting start to the week for sure.

No matter how the week starts, we should improve the balance of the week from Tuesday on through Friday as the dry weather settles back in over the state. Temps pull back closer to normal and we should see some decent drying for those days. Next weekend is getting just a little bit more interesting. We have to watch a system coming out of the northern plains. Recently, storms on this track have been mostly a great lakes threat, nothing more. The one for this coming weekend looks similar but seems to lack the strength of previous northern pushes. That man means we have to keep an eye out for a few scattered showers over northern Indiana. We will take another look at this to start next week. For now, most of the state should be dry on Saturday, and the entire state Sunday. Showers Saturday would be limited to only the northernmost quarter of the state. WE will see strong southwest winds with much warmer air arriving that will spur some significant drying next weekend, even if we do have to dodge a few showers near the Michigan line.

The extended period is getting some better definition this morning and is also getting wetter. We have the aforementioned front and system moving through for the 16thinto the 17th bringing .25”-1” over 80% of the state, and then a second strong front around 20th and 21st that can bring another .25”-1.5” of rain over 75% of the state. Those two systems in the extended period can bring two stages of cooler weather in, and we may be looking at some potential first frost temperature levels after the 21st.

In week three, we look for temperatures to be above normal, but precipitation below normal. Following that strong system right at the end of the extended 11-16 day period, we see strong high pressure coming in. This will be what keeps us dry, and it may keep systems at bay for most of the week. That would yield good harvest potential in there from the 19th through the 25th. For week 4, the pendulum swings the other way in epic fashion. WE see a strong system slowly working through the Corn Belt for the 26th, 27th and 28th (see map below), that will bring plenty of precipitation, and much colder air. Week 4 will be below normal on temps, and normal to above normal on precipitation.