Dry weather finishes the weekend. We expect sunshine and blue sky over a large majority of the state, and fair weather clouds elsewhere. However, while we continue to see heavy rains staying largely south of the Ohio River for Sunday, we are also cautioning that southern tier of counties in the state should prepare for at least a chance of showers Sunday afternoon and evening. There is no threat farther north.

Our long-expected rain for the start of next week kicks off on Monday. The rain will be a bit slow to start, spreading in from the south However, by Monday night and Tuesday we should be fully in the throes of moderate precipitation. The heaviest and most frequent rains will be seen through Tuesday. We are expecting rain totals of a half to 2” combined over nearly 100% of the state for the 2-day period. We can even see some lingering shower action into Wednesday morning, mostly over the southern half to third of the state before the sun returns everywhere. Sun will spread in on Wednesday from north to south. We will leave our estimate for additional rains up to .4” south of I-70 alone for Wednesday before precipitation moves out. Then we are fully dry for Thursday.

Friday should start dry, but we will watch for moisture to start to build in as clouds increase through the day. The rains may hold off until Saturday and may linger into Sunday…the timing is tough, as models are all over the place. In any case, we likely are looking at a final system before we bring the month to a close. The system has a potential for up to half an inch on the low end, but perhaps a max of 1.5” if things “go badly”. At this point, we are putting coverage at 80% of the state, while timing is slightly up in the air. 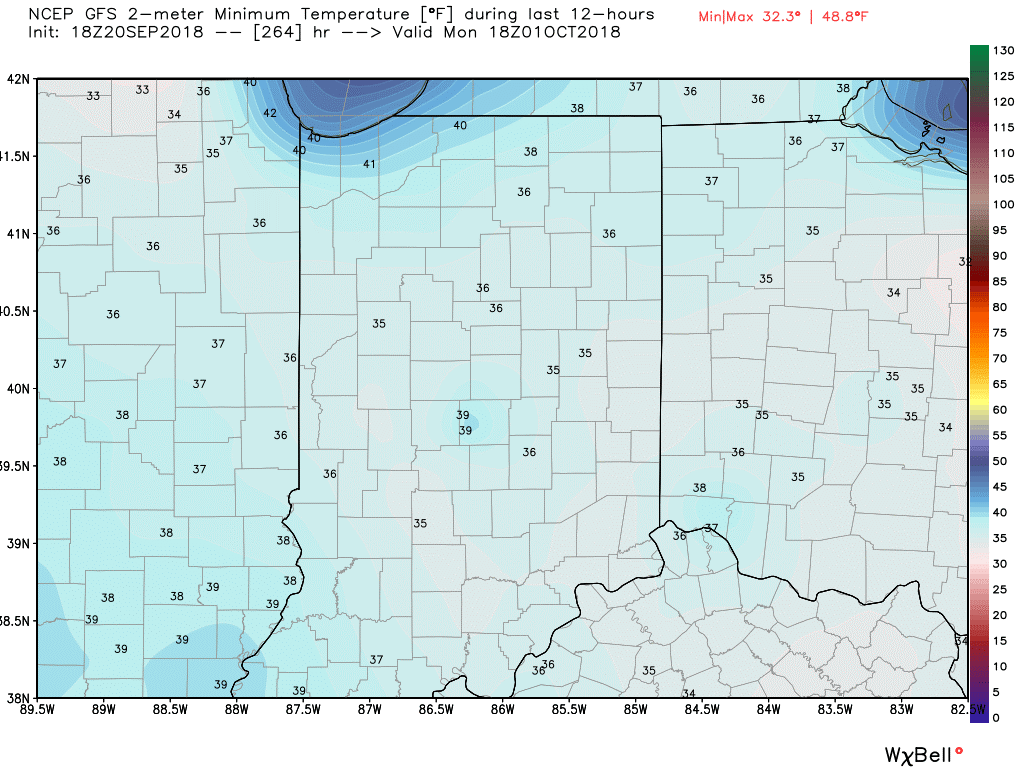 Temps are near normal as we finish the weekend, but then after the early week system, we move to normal and below normal by the end of next week. We continue to point to that Oct 1 to Oct 3 period as a window where we can see our first frost in parts of the state, mostly NE and east central. The map at right shows potential morning lows for October 1st.

The 11-16 day forecast period still is mostly dry. We have strong Canadian high pressure slowly meandering across the central and eastern corn belt in the period, and we should see low humidity and good drying again. The difference there vs what we have seen here recently will be temperatures…we should be significantly cooler as we finish September and move into October than right now. Looking past the end of the 11-16 day period, we see a strong front building to the west, and that should bring rains of at least 1 inch back in for closer to October 7th.

So, week three starts off with that system around the 7th, and then we see another minor front for the 12th. In week 4, there is one minor front around the 17th. That means we should see several more windows of opportunity out through October 20th for harvest to move forward. Overall, we expect temperatures to be below normal for both week 3 and week 4, and precipitation will be normal to above normal for week 3, but back near normal (or even trending slightly below) for week 4.