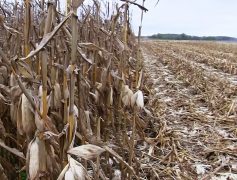 Widespread rains this week halted harvest but combines were running again by Thursday and now the question is how long can they run? In the new Seed Consultants harvest weather forecast update, HAT Chief Meteorologist Ryan Martin says recent changes in the weather pattern mean dodging rain events ahead is now a requirement.

“Over the next few days we’ve got no more than 2, 3, if you’re lucky 4 days in between rain systems that come through. We’re going to have a front that moves through early in the weekend, actually Friday night into Saturday that brings our next round of rain,” Martin says. “It’s only half the state, but we will see a harvest slowdown with a quarter to three-quarters of an inch of rain to the south and east of a line from Angola down to Evansville. Then you’re going to put together several dry days. The balance of the weekend looks good. Monday looks good, but we’ve got some cloud cover and damp feeling weather coming in for Tuesday. Our next full out front comes in next Wednesday, and then after that we’ve got another strong weather system coming toward the end of next weekend.”

Of course, Indiana is finally dealing with cooler weather, and it looks like those temperatures might be here to stay.

“They’re finally getting down to where they should be,” Martin said. “We were above normal for so long in October, and now as we flip the calendar going into November, I don’t think we’re going to be that far below normal, but we’re actually going to be near normal. So, if you put in good moisture every 2, 3, 4 days or so, and you’ve got temperatures that don’t do much better than the 40’s, 50’s or if you’re lucky low 60’s, you’re not going to see exceptionally fast dry down. I would say that we’re going to take quite a bit longer to move moisture out of the soil profile and out of these stalks to try to get the rest of harvest going as well.”

The harvest weather forecast is sponsored by Seed Consultants and Kokomo Grain, and if you would like it emailed to you, sign up at www.hoosieragtoday.com.