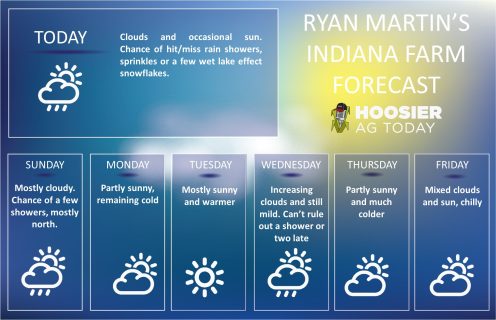 A strong upper level low works out of the Upper Midwest and across the Great lakes this weekend and will be quickly followed by a system we would call a “clipper” if it were later in the winter. The result will be plenty of clouds around through the weekend, and at least the threat of some minor precipitation. Overall, we don’t look for any more than a few hundredths to a tenth or two, with better chances in the north than the south. However, the other part of the equation will be much colder air. Temps will be a good 20-25 degrees colder this weekend and early next week than what we were seeing Wednesday this past week. That colder air means we dry much slower…so for remaining harvest we absolutely need to be on the minor side of precipitation going forward.

Monday gets better sun, and we see full sun Tuesday, just in time for a switch in wind direction. We take temps above normal and see good drying for Tuesday and the first part of Wednesday. However, clouds return Wednesday afternoon, and our next frontal boundary will sag through later Wednesday and overnight. Moisture again looks unimpressive, at a few hundredths to .3” and coverage at 70%. But the cold air that comes in behind is more of the story. Temps Thursday and Friday of next week will be colder than what we are dealing with in the short term this weekend. 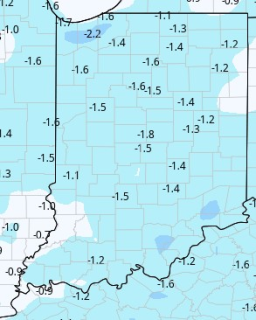 After some sun and a slight bump in temps next Saturday (20th) we have a final front for the 10 day period next Saturday night and Sunday. Moisture is again limited, so we are projecting a few hundredths to .1” with 60% coverage. But temps behind will be colder than the previous airmass change. Think of it as a roller coaster, with less high hills and deeper valleys for our temperature run over the next 10 days. The map shows temps compared to normal over the next 10 days.

The extended period remains mostly dry, but cold. Temps will stay below normal, and we do not see any significant surges in daytime highs through the week of Thanksgiving. That being said, we should see good sun every day and we can coble together net drying, given the lack of moisture. A cold front materializes the closer we get to the extended period around Sunday the 28th. That actually develops as warmer air surges northward, creating the opportunity to wring some moisture out of the front as it passes through…but still probably less than .25”