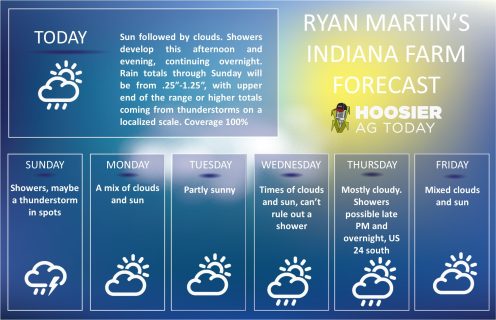 After a wide open and nearly perfect week for harvest this past week, we face a few delays early in this harvest forecast and then a pattern that offers opportunity, but at the same time does not turn out nearly as nice as what we just experienced. We would venture to say that we ended up being a little “spoiled” by the past week, as we could not have asked for any better of a finish to September.

The weekend will feature a frontal complex working into the eastern corn belt from the west. Any chance for harvest or field work will come through the first half to three quarters of Saturday, as clouds increase. We expect showers to arrive late afternoon and evening, and then continue through Sunday. Rain totals do not look excessive, but we can see some thunderstorms in a few spots. At this point, we are looking for .5”-1” combined for the period by the time all is said and done as of midnight Sunday night in areas without thunderstorms. But, downstate where thunderstorms have better potential (even a few areas in far NW IN), totals could be over an inch. The map at right shows our spread. 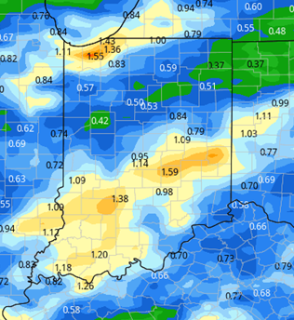 This coming week is interesting. The frontal complex sweeping through here ushers in an upper level trough and low pressure area that sits down over the southeast US Monday through Thursday. This will likely keep more clouds around, mixing with sun for the first 3-4 days of the week. As the clouds rotate through, we cant completely rule out pop up showers, especially in southern Indiana. We really do not think this is going to be a huge deal, and most of the state will stay dry, but we just want to reiterate, that we cant call the region completely dry for this week, and its nothing like last week. OF the shower chances, the best opportunity may end up being Thursday overnight, again mostly from US 24 south. Clouds continue to mix with sun through Friday and Saturday, before we go fully sunny and dry to finish the period Sunday and Monday. We will see some significant warming and a stiff south breeze those days, facilitating the warm up.

The extended 11-16 day forecast period has a front sweeping though from the west early, for Tuesday afternoon the 12th and that night. Rain totals look less impressive than earlier projections and could give .1”-.5” over 80% of Indiana. We then are dry for Wednesday the 13th through Saturday the 16th. At the end of the extended period, showers return, sagging into northern Indiana out of the Great Lakes on a cooler air mass. However, totals still do not look large, at mostly .4” or less.

The drier than normal pattern returns for week three, as we could end up completely rain free from the 18th through the 24th. Then we see some moisture returning, but not large amounts for week 4, with near normal precipitation to end the month. Temperatures are well above normal through the entire period, and that will put us on track to be well above normal for the entire month of October, with a decent extension of the growing season. 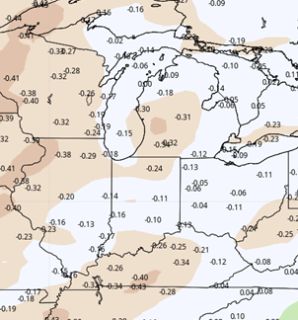 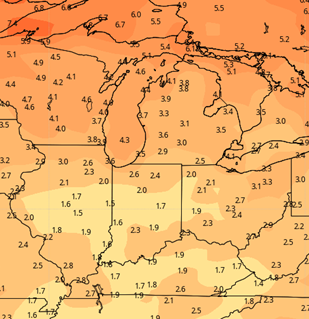 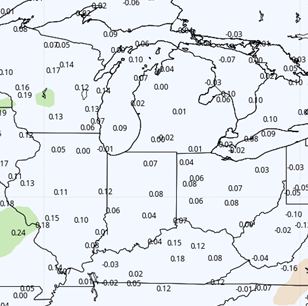 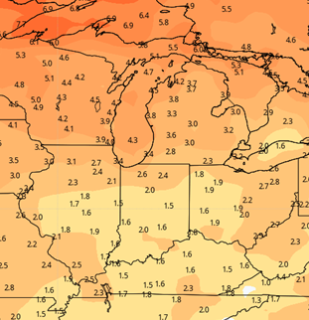