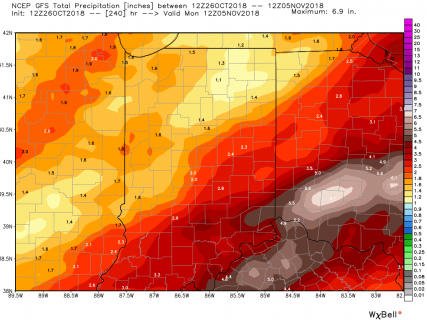 We may have seen the best harvest weather in our rear view mirror as you read this. The weather pattern is shifting to a more active one. Clouds will dominate through the weekend and Monday, and we have plenty of chances for showers across the region. There is less of a chance of moisture Saturday than later in the weekend, but with clouds holding over the state, we still not be surprised at pop of light showers.  Better organized precipitation is back for Sunday. A trough trough moves through from west to east and will have another round of showers with it. Rain totals Sunday can be from a few hundredths to .5” over 90% of the state.  Clouds and some hit and miss moisture (a tenth of an inch or less) will linger through Monday. All told, we think from today through Monday, a majority of the state will see between .25” and .75” of new precipitation, enough to slow and even stall harvest.

Dry Tuesday. On Wednesday we are bringing in moisture once again. A front coming in from the west and north triggers showers and as we move into Thursday, the intensity picks up in southern Indiana. We can see rains linger through into Thursday night. Everything will be done by midnight Thursday night. Rains will end much sooner, perhaps even Wednesday evening in NW Indiana, but linger in the south and east. Rain totals run from .25” to 1.5” across the entire state, with the upper end of the range in southern and eastern areas.  We think there can be some cumulative 2”+ totals near the river. The map shows 10 day cumulative rain chances, with good thunderstorm and heavy rain potential near the river.

Friday will be dry. But scattered showers return for Saturday midday and linger into the evening. Moisture totals are not impressive but can bring up to a quarter of an inch with coverage at 60%. However, the rain coming Saturday means we should be mostly dry Sunday, and clouds will try to break up some.

The extended 11-16 day period keeps moisture around closer to the 5th into the 6th, and then a stronger low near the 7th. Those systems combined can give up to an inch or so across 70% of the state. We also remain confident in a system closer to the 11th, which still sits just outside our 16-day forecast window. Temperatures over the next 2 weeks will be mostly normal to below normal but as the midweek system develops next week, we think there can be a short term 2-3 day surge in temps to above normal levels.

Most of the week 3 and week 4 periods look rather benign. In fact, we may swing back to a relatively dry period after the 8th and 9th for a couple of weeks. Still, that will likely be enough (the system around the 7th-8th) to take precipitation above normal in week 3. Temps near normal both weeks. The big action will be found on the east coast. 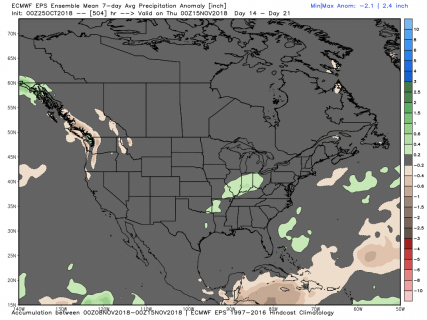 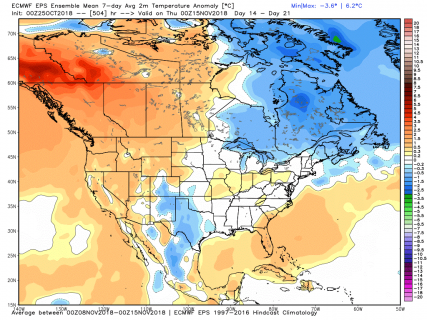 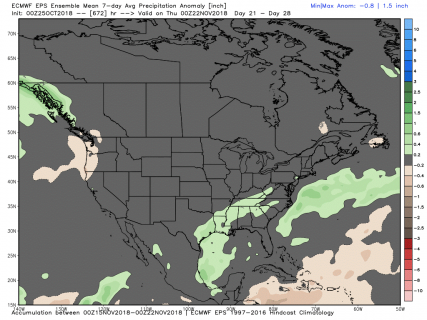 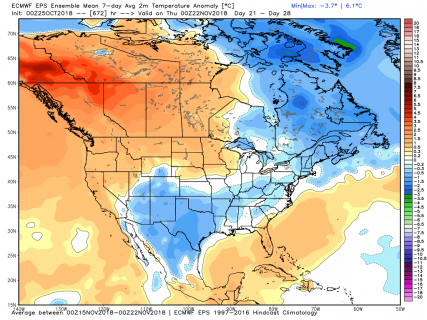