Some covers have started to green up, but that doesn’t mean it’s time to spray and terminate your cover crops. Scott says it’s critical that the cover crop be actively growing before you terminate and you need to be, “Watching those nighttime lows. If it gets down to 20-some degrees, we’re not going to be too excited about spraying that next day.”

What if we have a wet spring like we did last year?

“If we get into that later scenario where the cover crop is really growing fast, the big ‘no-no’ in my mind would be to go out and spray that cover crop and not be able to plant it before the next rain,” says Mills. “If, let’s say, you spray a nice, lush, tall cover crop, it rained and you can’t get back in there for three weeks and the cover crop dies and falls down, it’s going to create a matte that will be almost impenetrable to dry out anytime soon.” 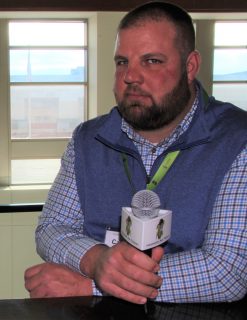 Mills says that RoundUp is a popular herbicide for terminating cover crops; however, “Roundup doesn’t kill every cover crop. Sometimes you have to add that broadleaf, like a 2,4-D, like a dicamba, something to take out the rapeseed, the vetches, and some of the other broadleaf cover crops that we use because glyphosate won’t take those all out by themselves.”