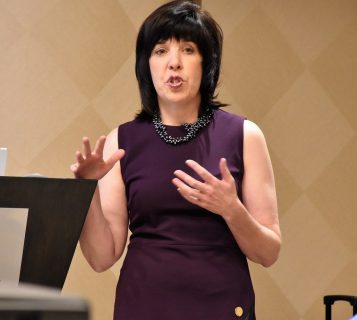 As the nation’s opioid epidemic continues to create heartache in rural communities, one Hoosier works to curb the crisis from the White House. Former Indiana State Department of Agriculture director Anne Hazlett is the Senior Adviser for Rural Affairs for the White House Office of National Drug Control Policy. She says her work is quite focused on getting available resources to the right places.

“There are a lot of resources spread throughout different federal agencies, whether it’s at Health and Human Services or Department of Justice, and we’ve been able to begin pulling many of these resources together in a more collaborative way, as well as importantly assisting those leaders in small towns of better knowing how to access everything that’s out there, whether it’s at the federal level here or at the state level in a place like Indiana.”

Hazlett said working to curb drug addiction in rural communities is a deep passion of hers and working in the new position allows her to do across the federal government what she had previously done at USDA where she was Assistant to the Secretary for Rural Development. The work being done is important for a crisis that has permeated all parts of the country, but Hazlett says there has been progress.

“Sadly, this is an issue that has not known a geographic boundary or limitation with zip code,” she said. “It has affected big cities and small towns from coast to coast, but we are seeing signs of progress in a reduction in the number of lives lost. We’re also seeing prescribing rates down. People are increasing access to treatment, so we see signs of progress, but we know that we need to be relentless in our efforts.”

Hazlett is helping shape policy for improving the quality of life in rural America with strategies for drug prevention, treatment, and recovery. Too many people are lost to addiction.

“It’s about 200 people a day and that is staggering when you stop and think it’s an airplane full of folks that are no longer in their communities, no longer with their families. This is an issue that we will continue to fight until no lives are lost.”

Among the resources is the Extension service. Hazlett told HAT their involvement in local communities makes for a perfect partnership.

“Extension is a resource that has helped rural areas address opportunities and challenges for generations and this is just another issue that is an all-hands effort to fight.”

She said Extension has been at the table working on opioid addiction in many states and counties, and she sees that partnership continuing into the future.