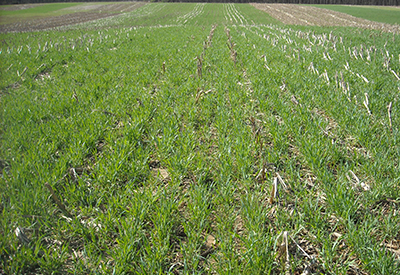 In last week’s article we discussed the herbicide shortage for the 2022 growing season and outlined a couple of scenarios where we can switch to alternative herbicides to accomplish the same weed control objectives.  In this article, I want to discuss some options for fields that have a mixture of cover crop species growing in them and how to effectively terminate the cover crops before corn or soybean production.

Corn – Multispecies mixture of cover crops that contains cereal rye, (although some may use annual ryegrass rather than cereal rye) and other species which include legumes and brassicas that need to be terminated prior to corn planting.

We have to design a program to 1) control the winter annual cover crops and early spring summer annual weeds that have emerged, and 2) factor in the fairly long list of residual premixes that might have some combination of atrazine, isoxaflutole, mesotrione, rimsulfuron or thiencarbazone, metribuzin, or saflufenacil in them.  All these herbicides have some foliar activity on some cover crop species and fit into this burndown/termination scenario.  Isoxaflutole, rimsulfuron, and thiencarbazone have foliar and residual activity on grasses and will control a few selected broadleaf cover crops and weeds.  Metribuzin, saflufenacil, and mesotrione have foliar and residual activity on the legumes and brassica cover crops, a key no-till weed, horseweed (aka marestail), and can also help with waterhemp and Palmer amaranth control.  A group 15 herbicide (metolachlor, dimethenamid, pyroxasulfone, acetochlor) is also needed to form the backbone of the soil residual grass and small seeded broadleaf weed control program for the season.

The key challenge with this system is how to control large cereal rye or annual ryegrass if glyphosate is in short supply?  One possibility is to terminate the grasses early (March), while the grass cover crops are small (6 inches tall or less) with clethodim, a reduced rate of glyphosate or paraquat added to a broadspectrum residual herbicide that contains isoxaflutole, rimsulfuron or thiencarbazone.  Except for clethodim applied by itself, the rest of the treatments mentioned can suppress or control many of the other cover crop species in the mixture.  Keep in mind that the activity of clethodim will be slow in cool weather conditions and will require a preplant interval before planting corn.  If you choose to go this route (early termination) with your cover crop termination program, you will need to determine the overall value of limiting additional biomass production of the other species with this decision.  Regardless of your decision, if glyphosate is carrying the load for terminating the grass, add saflufenacil or a saflufenacil containing herbicide to speed up the activity of glyphosate on the grass species.  If you use paraquat, add atrazine or an atrazine containing premix to the application to improve grass control.

If you wait to terminate cover crops closer to planting (mid-April through mid-May), you will need a full rate of glyphosate to terminate the grasses, paraquat won’t be effective on the larger grasses, and the clethodim preplant interval might be too constraining to be a viable option.  If we are in a warm, sunny weather pattern, glufosinate could be substituted for glyphosate, but be prepared to do a follow up treatment if complete control is not achieved.  If glufosinate is used, the best management strategy will be to apply it with something that has grass activity such as an isoxaflutole, rimsulfuron, or thiencarbazone containing premix to help with grass control.

For weeds that break through the cover crops and termination/residual treatment, use glufosinate + dicamba on Liberty Link corn or glyphosate + dicamba on Roundup Ready corn and add a 1/3 to ½ label rate of the atrazine premix product that contains a group 15 herbicide to lengthen the window of residual weed control in the crop.  You can also use Revulin Q, Realm Q, Armezon, Armezon PRO, Impact or Laudis for postemergence grass control if glyphosate or glufosinate is not available or the corn is non-GMO corn.

Soybean – Multispecies mixture of cover crops such as cereal rye, (and to a lesser extent annual rye) and other species which include legumes and brassicas to be terminated prior to soybean planting.

In this field, broadleaf cover crops and possibly horseweed are the main target with the burndown treatment.  Start of by determining which soybean trait will be planted.  If it is non-GMO or straight Roundup Ready or Liberty Link, remember that there will be a preplant interval for 2,4-D or dicamba applications, and for these traits, the 2,4-D interval is shorter.  A mixture of 2,4-D + saflufenacil or metribuzin for legumes and brassicas will be the backbone of the burndown program.  Generally, 2,4-D is a bit weaker than dicamba on some of the legume cover crop species, but the addition of metribuzin or saflufenacil will help to increase overall efficacy.  Considering the soybean traits chosen here, adding 2,4-D to premixes that contain saflufenacil (Verdict, Zidua Pro) or metribuzin (Authority MTZ, Canopy Blend, Intimidator, Kyber, Matador, Boundary/Moccasin MTZ, Trivence, or Panther Pro) makes the most sense and would require a 7 to 30 day preplant interval depending on the 2,4-D formulation and rate used.  If you planted Enlist soybeans, you would use the same strategy, but no preplant interval is required if you use the 2,4-D choline (Enlist One) product from Corteva.  If you plant Xtend or XtendFlex soybeans, simply replace 2,4-D with an approved dicamba product (Engenia, Xtendimax, or Tavium) and no preplant interval is required for that trait.

As mentioned in the corn example, the key challenge with this system is how to control large cereal rye or annual ryegrass if glyphosate is in short supply?  One possibility is to terminate the grasses early (march), while the grass cover crops are small (6 inches tall or less) with clethodim, or a reduced rate of glyphosate or paraquat added to a broadspectrum residual herbicide.  Remember that the glyphosate- or paraquat-based treatments can suppress or control many of the other cover crop species in the mixture.  If you choose to go this route with your cover crop termination program, you will need to determine the overall value of limiting additional biomass production of the other species with this decision.  Regardless of your decision, if glyphosate is carrying the load for terminating the grass, add saflufenacil or a saflufenacil containing herbicide to speed up the activity of glyphosate on the grass species.  If you use paraquat, add metribuzin or a metribuzin containing premix to the application to help paraquat on the grasses.  Clethodim can be used for emerged grasses, but activity will be slower in cool weather conditions and can also be antagonized by other components of the mixture (2,4-D, dicamba, acetochlor).  Rimsulfuron can be used 30 days or more before planting soybean and may help with winter annual grasses, providing some residual control of summer annual grasses as well.  Use of rimsulfuron would be best suited to STS or Bolt soybeans since they will be more tolerant to rimsulfuron.

Roller Crimping – We know there are a few folks out there that have had good success with roller crimping as part of their termination program.  We have experience with roller crimping cereal rye and balansa clover, but less experience with other cover crop species.  The key to making the roller crimper work is to hit the weeds at a time when they are less likely to stand back up after being hit with the crimper.  For cereal rye, this stage of growth is anthesis, which means the cereal rye is fairly large and the biomass production on the field is substantial.  For those that have not used roller crimping previously, you will need to do your homework about the impact of very high biomass production on corn and soybean stand establishment and yield, and decide on whether waiting that long to terminate with the roller crimper fits your production goals.

Mowing – Mowing is pretty straight forward and allows some flexibility in timing. The obvious considerations here are timing and frequency (mowing can be done more than once before planted if needed), mowing height, the time and labor needed to complete the operation, and dealing with biomass accumulation in streaks. Most farmers have some experience with mowing and corn stalk shredding, so there really isn’t a lot that needs to be written in this article about the process.

These are just a few examples of some different scenarios to consider when building a weed control program.  Keep in mind that the concern isn’t just the limited supply of glyphosate and glufosinate, but the increase in cost, especially glyphosate which may be 4X the cost just a few years ago, which makes other herbicide options much more feasible that you didn’t consider previously.  We will add other examples to this discussion as we write our future newsletter articles through the winter months.  We will also be covering this topic in our winter county meetings as well.