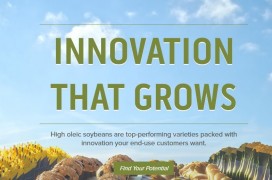 Good standing soybeans with minimal disease issues and excellent yields. That’s the report in a nutshell from Cass County, Indiana farmer Kevin Wilson after finishing his high oleic soybean harvest this year. Wilson has grown the beans for a number of years, and with about 560 acres this year, he has a significant sample size for the positive report.

“Our yields this year are like most for the soybeans I think, better than they have been for the past year or two, so we’re pleased,” he said. “The high oleic seem to be every bit of our regular beans, so we were pleased with that as well.”

These soybeans produce a zero-trans fat oil with high heat stability, important components for attracting additional food and industrial markets, which is a priority for the United Soybean Board, for which Wilson serves as a director. He told HAT there is now a strong focus on getting more high oleic planted acres, and 2016 was another year of progress.

“I know we were up quite a bit here in Indiana and then we got started in parts of Nebraska and Iowa as they had some of their first ones out there. Ohio is up from where they were a year ago, so we’re making progress. It’s like a lot of things in that part of what’s holding it back I think is the approval process. We’re still waiting final approval from an EU standpoint, one that we all thought we would have done a couple of years ago.”

Much has been learned about logistics like keeping the oil separate, and if EU approval comes this winter Wilson believes the high oleic effort could ratchet into a much higher gear.

“ADM and Bunge and some of these other companies that are getting interested and they’re wanting more and more acres. The premiums that are being offered right now are a little bit more enticing at the price levels that we have currently, so I see this thing I think turning the tide a little bit.”

Wilson adds next year will see more available varieties than ever. Hear more: