High temperatures and scattered rains continued to push crop progress ahead of schedule, according to Greg Matli, State Statistician, USDA, NASS, Indiana Field Office. Fields had begun to dry out in much of the State, but scattered showers replenished soil moisture in some areas, particularly in the central and northwestern parts of the State. The average temperature for the week was 77 degrees, 2.8 degrees above normal for the State. The amount of rainfall varied from 0 inches to 2.23 inches over the week. The statewide average for precipitation was 0.58 inches. There were 5.6 days available for fieldwork for the week ending July 8. 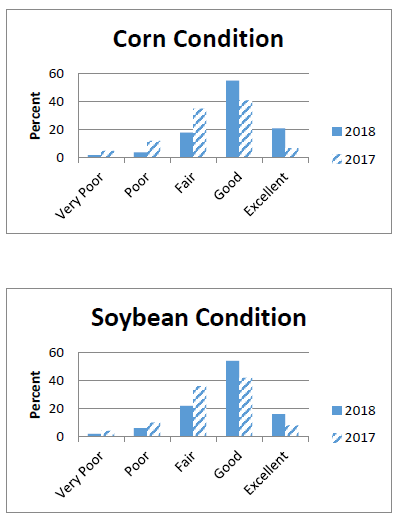 Another week of hot weather kept the number of growing degree days above normal for the majority of the State. As a result, corn and soybean progress remained ahead of both the previous year and the five-year average. With the below average rainfall, farmers were able to make significant headway on winter wheat harvest and hay cutting. Areas that missed out on the scattered rains last week reported concerns of potential drought stress. Livestock were also reported to be negatively affected by the intense heat. Other activities for the week included spraying soybeans, treating corn fields with fungicide, mowing roadsides, hauling grain, and certifying acres with FSA. 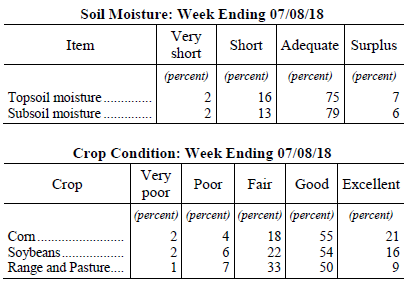