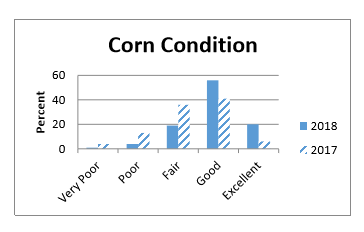 Above average temperatures last week helped dry fields and spur crop progress, according to Greg Matli, State Statistician, USDA NASS, Indiana Field Office. Scattered showers kept soil moisture high in some areas, particularly in the southern part of the State with heavy storms moving through early in the week. The average temperature for the week was 76.4 degrees, 3.2 degrees above normal for the State. The amounts of rainfall varied from 0.01 inches to 3.41 inches over the week. The statewide average for precipitation was 0.86 inches. There were 4.5 days available for fieldwork for the week ending July 1. 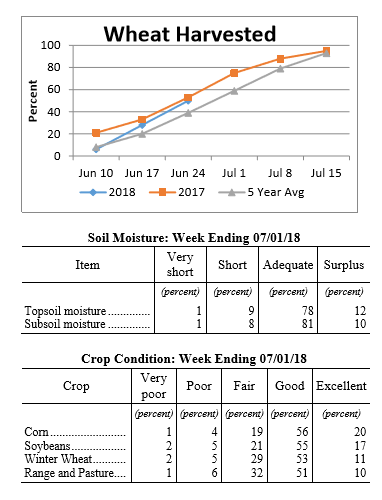 Warmer, drier weather last week helped dry fields after the previous week’s above average rainfall and accelerated crop progress. Corn silking and soybeans blooming were both well ahead of previous years, while winter wheat harvest had caught up to last year. The favorable conditions allowed farmers to make progress with hay cutting. Severe storms isolated to the southern districts resulted in reports of downed corn in some fields. High temperatures impacted pasture conditions in areas lacking rainfall, mainly the northern part of the State. Livestock were reported in good condition through mid-week, but the high temperatures in the latter half of the week added stress. Other activities included hauling grain, mowing roadsides, straw baling, certifying acres at FSA, and preparing for county fairs. 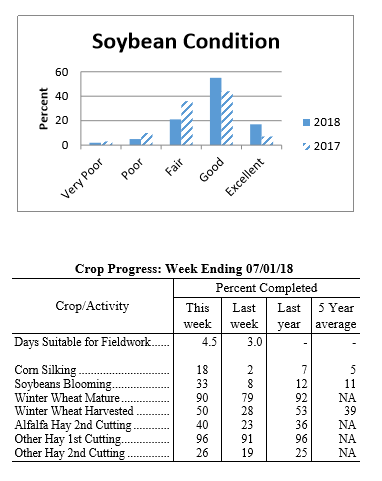