Last week we saw much needed rain come to many parts of Indiana, but high winds also caused damage to some fields in Southern Indiana. A tropical depression up from the Gulf provided some much needed rain to crops across the state including Southern Indiana, says Bill Meacham with DuPont Pioneer. “We had areas that were really dry and definitely benefited from the 2-5 inches of rain we got last week,” he stated. 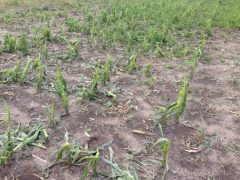 But the high winds that accompanied the rain caused damage to some early crops, “We have had reports of root lodging and in some areas some brittle snap damage.” Meacham said, in most cases, the  root lodging will correct itself, but it will not come back in the case of brittle snap where the plant has been broken off at ground level.

Meacham said wheat was also impacted by the storms, “We have had some of the wheat go down as a result of the storms.” He noted that many fields are beginning to turn and that the crop had looked good until now. Statewide Indiana’s wheat is rated at 66% good to excellent with 88% of the crop headed.

Overall, Meacham says corn looks good and yields may be higher than most producers were estimating a few weeks ago.  According to USDA, 77% of Indiana corn is currently rated as good to excellent.